Travellers: Government to Change the Law to Introduce the ‘Irish Option’ 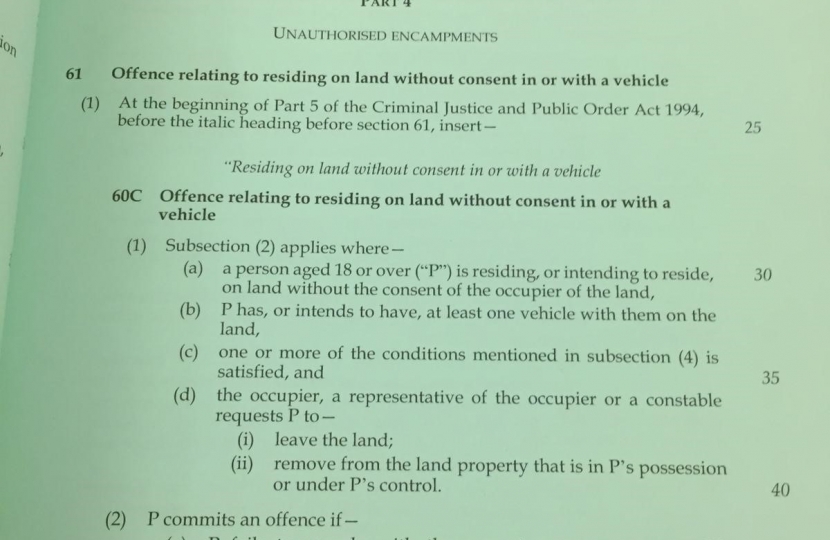 Rayleigh and Wickford MP, Mark Francois, has warmly welcomed the announcement that the Conservative Government has now introduced legislation into Parliament, to turn the so-called “Irish Option” into law.

The new Police, Crime, Sentencing and Courts Bill, (the PCSC Bill) had its formal First Reading in the House of Commons on Tuesday 9 March. Part 4 of the Bill contains powers to make acts of deliberate trespass a criminal offence, rather than a civil offence as at present. This change is popularly known as the “Irish Option”, as it is modelled on a similar change in the law, which took place in the Republic of Ireland several years ago.

Under the new powers contained in the Bill relating to “Unauthorised Encampments” , anyone who establishes an illegal encampment of one vehicle or more, on either private or public land they do not own, can be made to move on rapidly by the police. Failure to comply can lead to up to three months imprisonment, a fine of up to £2,500, or both. In addition, the police will be given powers to seize any property, including vehicles, which are owned by the person or persons committing the offence.

“While many Travellers co-exist with the settled community in Essex perfectly legally, unfortunately some others do not. As someone who has been campaigning on this issue, on behalf of my constituents, for over three years, I am delighted that the Government has now brought forward legislation to enact the Irish Option into law. I believe that once this legislation is on the Statute Book, hopefully within the next few months, it will act as a strong deterrent to anyone, including Travellers, who seeks to deliberately flout the law, by illegally occupying land which they do not own.  This tough new legislation should help put an end to the annual ‘cat and mouse’ game between Travellers acting illegally on the one hand and police and local authorities on the other, which has already been a blight on our local communities for far too long.”