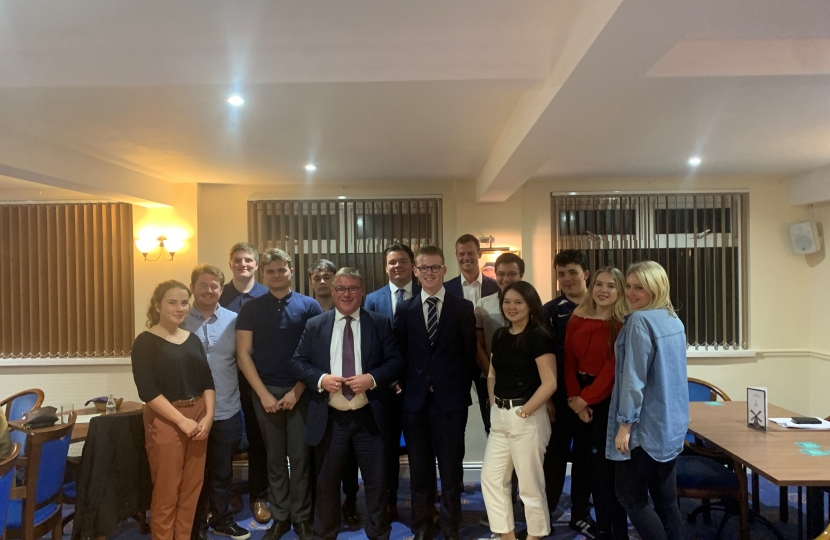 Rayleigh and Wickford Conservatives recently held a successful meeting at Rayleigh Conservative Club, hosted by local MP, Mark Francois, where they rebooted their existing Young Conservative branch, with around a dozen new members.

The previous Chairman of the Young Conservatives (YC’s), had to give up her post in order to commence her studies at university, and so the local Tories took this opportunity to revamp their organisation and to attract new young people from across the constituency, to join the YC’s. People attending came from Rayleigh, Hockley, Hawkwell and Wickford, with a healthy mix of those studying at university, those still at school and those who have graduated and returned to live in the area.

The group of young people were addressed by Mark Francois MP and local Councillor, Dan Nelson, a previous Chairman of Rayleigh and Wickford Young Conservatives, but who has since moved to Southend and been elected onto Southend-on-Sea Borough Council. Dan told the assembled youngsters that the role of the YC’s was to “have lots of fun, whilst keeping the Marxists out”, and on that basis, all present agreed to sign up to help revive the group.

The YC’s take people from the ages of 14 – 30 and have an active social programme as well as campaigning for the Conservative Party across South Essex. Anyone who is potentially interested in joining is encouraged to telephone Georgina Allan on 01268 742 044 for more details.