Tories Out in Force for Rayleigh By-Elections 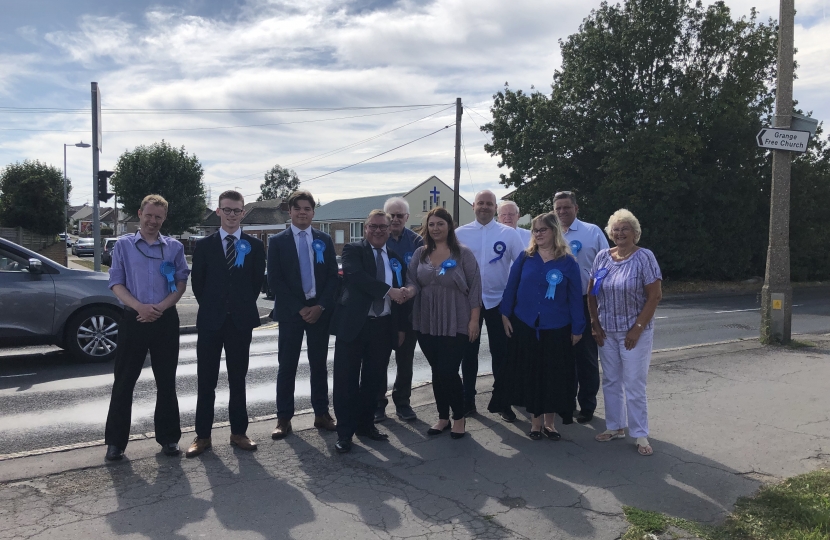 Local Tories, led by Rayleigh and Wickford MP, Mark Francois, hit the campaign trail in some numbers recently as they began the work to contest two local by-elections which are both due to take place in Rayleigh, on Thursday 26th September 2019.

The first by-election, for the Trinity Ward of Rayleigh Town Council, was caused by the by the untimely death of popular local councillor, Les Jeffries, a former Royal Artillery Veteran, who sadly passed away several weeks ago. The Candidates in this election are Keith Podd, for the Conservatives, Ian Oakley for the Liberal Democrats and Samantha Reid, who is apparently standing as an Independent.

The second by-election is for the Grange and Sweyne Park Ward on Rochford District Council, which in this case, was caused by the resignation if Independent Councillor Toby Mountain, who is leaving the country to take up a job opportunity abroad. The Conservative campaign team were out on the doorsteps in the area around London Road on a recent Saturday afternoon, led by Mark Francois MP and with Conservative candidate Danielle Belton, who works for a green energy company based in Wickford. The other Candidates in this election are Lisa Newport for the Liberal Democrats and Jill Weight for the Green Party.

Commenting on the campaign so far, Mark Francois MP said:

“We were out on the doorstep with Danielle, and I am pleased to say we got a good reaction. Nationally, many people were pleased that Boris Johnson was finally getting on with Brexit. Whereas locally, people seemed to think that Conservative controlled Rochford District Council were doing a good job. For example, our three-bin doorstep recycling system continues to be one of the best performing recycling systems in the entire country, something which Danielle is very keen on as an environmentalist herself. I hope as many people as possible will vote in both of these elections and that we will see a healthy turnout.”