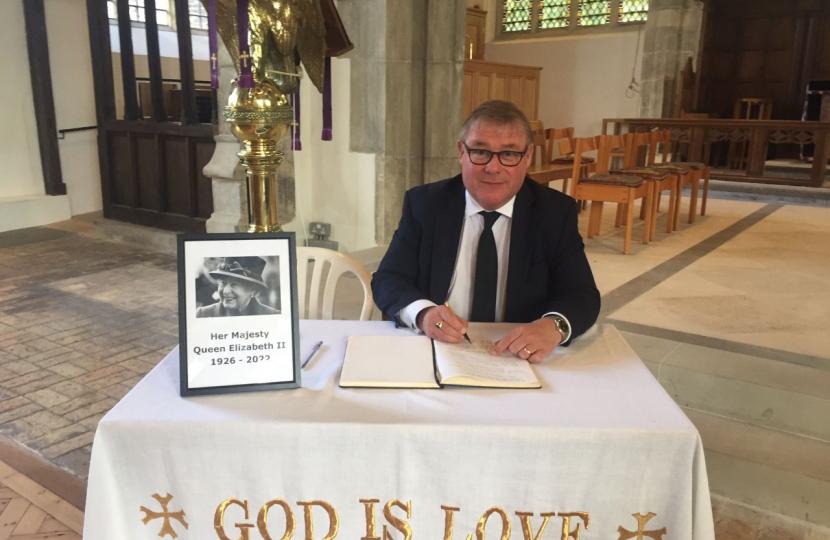 Mark began the day at St. Catherine’s Church, in Southend Road, Wickford, where he signed the book of condolence, which had already been counter-signed by many of his Wickford constituents. Mark also spoke with visitors and staff at the church, who had come to St. Catherine’s to demonstrate their affection for the late Queen Elizabeth.

At noon, Mark then attended Holy Trinity Church, in Rayleigh, where he took part in a special prayer service of thanksgiving for the life of The Queen, conducted by the Revd Glen Mansfield, the new team rector at Holy Trinity. Mark then added his signature to the book of condolence as well.

As well as being the local MP, Mark is also the President of the Friends of Holy Trinity, a voluntary charity, which, down the years, has helped to raise over half a million pounds towards the upkeep of the part-fourteenth century church, at the top end of Rayleigh High Street.

Speaking about his time visiting both local churches, Mark said:

“As the Member of Parliament for Rayleigh and Wickford, I was grateful for the opportunity to visit two churches in my constituency this morning, to sign books of condolence, on behalf of people right across my constituency, from Nevendon to Paglesham, as well as from its two principal towns. There were some lovely personal tributes which had been written in both books, by young and old alike. I was particularly struck by one entry, which read simply; “We will miss you Your Majesty, including at the races!”. I think it is important to remember that our new King, Charles III, has also lost his beloved mother, so our thoughts and prayers are with him and the rest of the Royal Family at this sad time. God Save The King.”