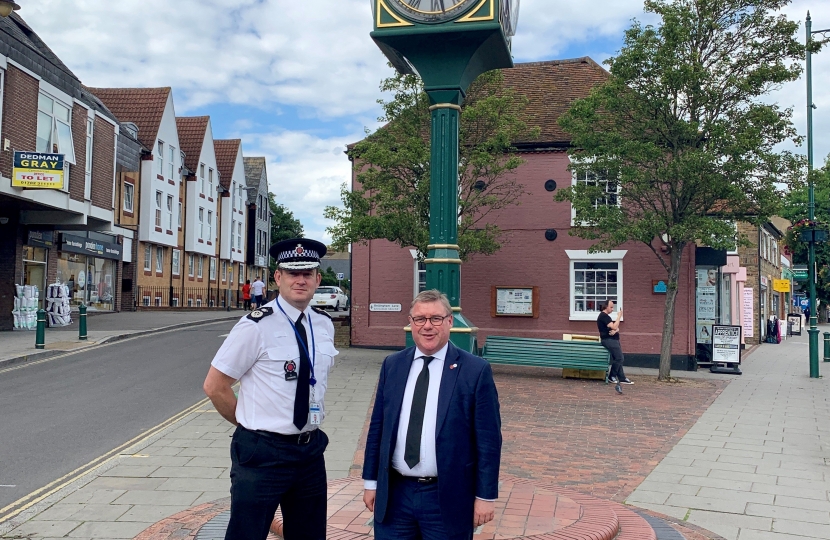 Rayleigh and Wickford MP, Mark Francois, recently held a meeting with Ben Julian Harrington, the new Chief Constable of Essex Police, to talk about ways of combatting recent incidences of anti-social behaviour in and around the Town.

The meeting took place in Rayleigh and the two men, supported by their respective staff, spent around an hour discussing the Chief Constable’s plans to expand policing in Rayleigh, including the deployment of a dedicated ‘Town Team’ of Officers, specifically designed to patrol High Streets in the District, including Rayleigh.

Mark raised with the Chief Constable, a number of unfortunate incidents of violent anti-social behaviour that have taken place in and around Rayleigh during the last few months. The Chief Constable pledged to encourage his officers to do all they can to combat this menace and preserve the Queen’s peace in the area. During their meeting, the two men also discussed the additional 150 or so police officers that have been added to Essex Police in the past year and the additional 200+ officers who are now due to join the Force in 2019/20.

“I have taken these instances of anti-social behaviour in Rayleigh extremely seriously and therefore, I decided to take the matter directly to the top as it were, and to discuss them personally with our new Chief Constable, B J Harrington. One thing I learned during our meeting, is that, like me, the Chief Constable served in the Territorial Army during the Cold War, although whilst I served in the 5th Battalion the Royal Anglian Regiment, he served in the 10th Battalion, the Parachute Regiment – so we now have a former Para as our Chief Constable in Essex! As you would expect from someone who served in that Regiment, the Chief Constable said he would have no truck with yobs seeking to disrupt the quality of life of my constituents, and he pledged to do all that was necessary to help support his officers combat such problems in the future. I would like to thank the Chief Constable for a very encouraging meeting and I look forward to working with him closely over the months and years ahead.”

Travellers: Government to Change the Law to Introduce the ‘Irish Option’

Rayleigh and Wickford MP, Mark Francois, has warmly welcomed the announcement that the Conservative Government has now introduced legislation into Parliament, to turn the so-called “Irish Option” into law.