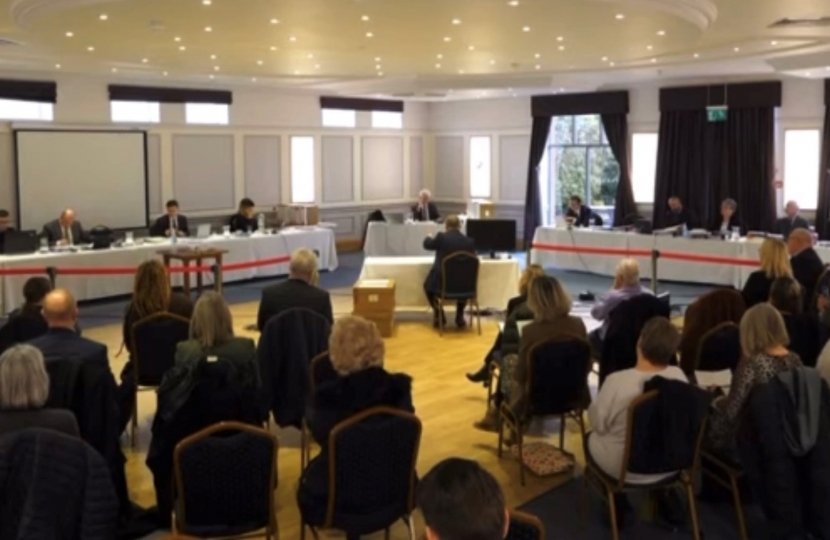 In June 2021, Rochford District Council’s Planning Committee, rejected the Bloor Homes planning Homes application at Ashingdon. As a result, Bloor Homes, who are headquartered in Derbyshire, lodged an appeal against that decision, which has resulted in today’s Public Inquiry at Saxon Hall, near Southend Airport, led by the Planning Inspector, Mr David Wildsmith and is scheduled to continue for the rest of this week.

The appeal has been vehemently opposed by the local Rochford Supporters Group, ably represented at the Inquiry by Cllr Ian Foster and Ms Christine Austin.

During the Inquiry, Mr Francois spoke forcefully against Bloor’s application, highlighting the severe impact this would have on the traffic situation on the Ashingdon Road. Moreover, he explained the risk posed to young children attending the Holt Farm Junior and Infant Schools, which are directly opposite the entrance to the proposed development site, in pursuit of profit.

Commenting after his appearance at the Public Inquiry, Mark Francois MP said:

“This proposed development fails on sheer common-sense grounds right from the outset. It is abundantly clear to me and, I hope to the Planning Inspector too, that the real-world effect of these proposals is likely to be “severe” at best and highly dangerous at worst and so the appellants case should be comprehensively rejected.

I would like to take the opportunity to thank Cllr Ian Foster, the Rochford Supporters Group and Cllr Laureen Shaw and Cllr Simon Wootton from Rochford District Council for all the work put in on opposing this highly unsafe development.”