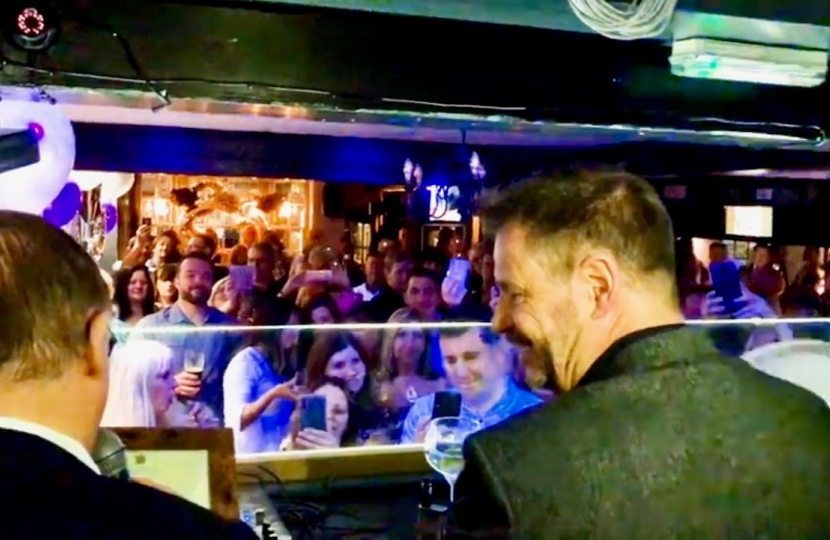 Rayleigh and Wickford MP, Mark Francois joined hundreds of revellers at a packed party in the Spread Eagle pub on Rayleigh High Street at the weekend, to pay a very special tribute to popular Essex DJ Martin Day, on the day that he completed his final breakfast show after 25 years on radio in the County.

The surprise party, which was organised by Martin’s wife Debbie, Russ the publican of the Spread Eagle, in conjunction with Mark Francois and others, was sprung on Martin who thought he was attending the pub to act as DJ at a regular Friday night gig. The surprise was revealed when Martin entered the pub at around 9pm, to the sounds of D:Ream’s ‘Things Can Only Get Better’ – the first song that he ever played on Essex FM when he joined them as a presenter 25 years ago.

As part of the evening’s celebrations, Mark presented Martin with a framed letter from the House of Commons, thanking him for his service to the people of the county over the last quarter of a century. Reading out from the letter to the packed audience in the pub with Martin standing beside him, Mark said the following in concluding his tribute to the popular radio host:

“In summary Martin, as an Essex MP for a mere 18 years, I am sure I speak for many across God’s Own County when I say the airwaves will not be the same without your welcome voice every morning. Nevertheless, we wish both you and Debbie all the very best for the future – whilst rightfully honouring your brilliant past.”

Martin, who was clearly taken aback by the very enthusiastic reception that he received, responded with a speech of thanks to the assembled multitude – before taking to the turntables and playing music for the guests until midnight. Overall, the event was considered a great success, including by Martin and his very proud family.