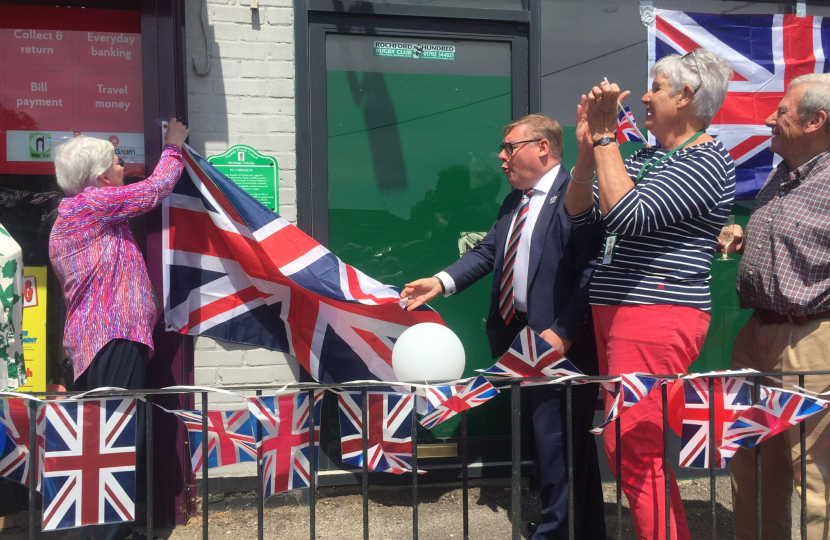 Rayleigh and Wickford MP Mark Francois joined members of Hockley Parish Council and local residents recently, to unveil a plaque to commemorate a medieval Manor House which stood on the site of what is now a row of local shops at Plumberow Avenue in Hockley.

The tiny Hamlet of Plumberow was mentioned in the Norman Domesday Book, which surveyed the ownership of virtually all the land in England in the late 11th century, following the original Norman invasion of 1066.

The land is thought to have been granted to local baron Robert FitzWimarc by William the Conqueror and the site at Plumbeow is believed to derive its name from a tenant of FitzWmarc named “de Plumbergh”, who occupied a Manor House on the site.

The original Norman Manor House apparently survived until finally being demolished in the 1960s. Hockley Parish Council has now erected a historical heritage plaque outside the popular convenience store at the Apex Corner in Plumberow, which Mark unveiled as the local MP at a recent ceremony, attended by Parish Councillors and local residents.

Speaking about the event, Mark said: “As a history graduate myself, I do believe it is important to celebrate our local heritage and so I would like to commend Hockley Parish Council, both for researching the fascinating history of this Norman Manor and also producing a plaque to commemorate the area in which it was located. We have a rich history in the Rochford District, of which this site will now form another important part.”