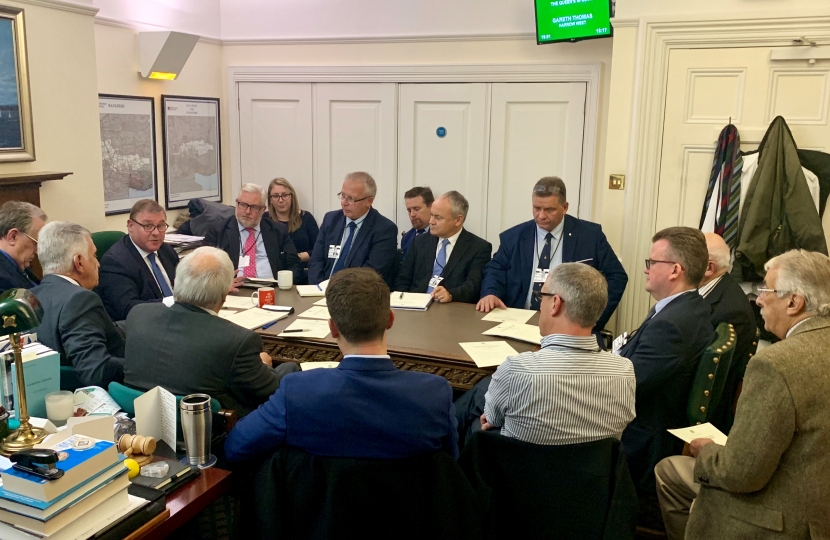 Rayleigh and Wickford MP, Mark Francois, chaired a special summit of representatives from Essex County Council Highways, Property Developers and Residents Groups, at his House of Commons office last night, to discuss the situation surrounding all the problems caused by developers digging up roads in the Rayleigh and Hullbridge area in the last couple of months.

Mark chaired the meeting in his Westminster Office, which was also attended by County Councillor Kevin Bentley, the Deputy Leader of Essex County Council and Cabinet Member for Highways, along with his senior highways’ officers. Also present, were a number of property developers, including Barratt – David Wilson (who have been digging up the roads in Hullbridge); Countryside Properties (who have been digging up Rawreth Lane); Silver City Estates (who have been digging up London Road) and representatives form the new development at Timber Grove, also based off the London Road. Residents groups invited, included the Rayleigh Residents’ Association and the Hullbridge Residents’ Association, plus Action Groups Resisting Overdevelopment (AGRO).

During the meeting, all present discussed what had gone wrong and agreed to try and learn lessons to prevent such a situation from happening again. Most of the current work is now nearing completion and will hopefully be done by the end of the month. However, as the Countryside development is linear in nature and stretches from Rawreth Lane in the North, to London Road in the South, this is likely to necessitate further work next year.

“All present, whether Essex Highways, Developers or Residents, all agreed that we cannot allow the shambles that have taken place over the last couple of months to happen again. In particular, Essex County Council agreed to monitor, much more closely in future, the giving out of permits to allow developers to work on the highway, to try and ensure that we don’t have multiple obstructions on the key roads at the same time. I would like to thank County Councillor Kevin Bentley and all those others who took the trouble to come to Westminster, to attend this meeting, I genuinely hope it will lead to lessons being learnt in the future – which I’m sure my constituents would be grateful for.”