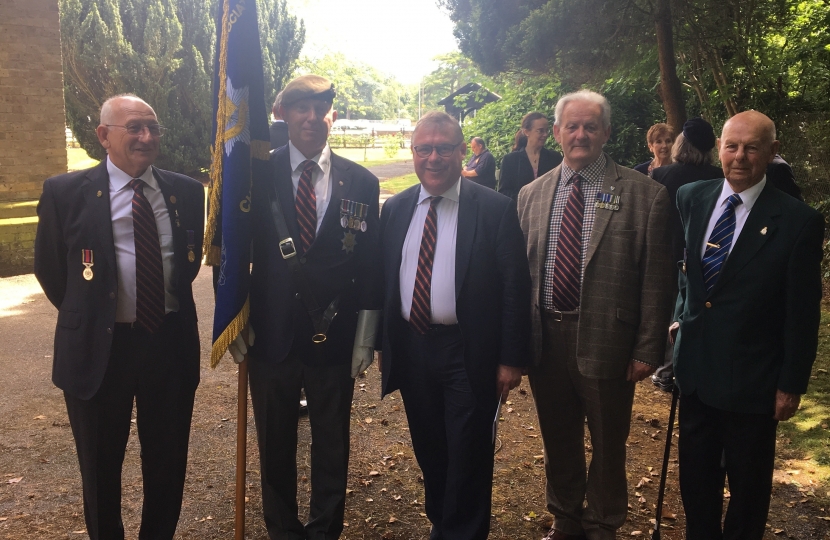 Rayleigh and Wickford MP, Mark Francois, a former Armed Forces Minister who also served as an infantry officer in the Royal Anglian Regiment during the Cold War, recently attended a service of thanksgiving at the Royal Anglian Regiment/Essex Regimental Chapel at Warley in Brentwood, to give thanks to those who laid down their lives on D-Day, 75 years ago. On that historic day, the 2nd Battalion of the Essex Regiment landed at Gold Beach, before moving inland as part of the allied advance.

The service was attended by a number of veterans from the Royal Anglian Regiment and also the Essex Regiment, one of the original constituent county regiments from which the Royal Anglian Regiment is now drawn. Around 100 veterans and their families attended the commemorative service, where a lesson was read by the Padre about the need to seek to avoid war and work towards a peaceful world in the 21st century, in which conflicts are resolved by discussion, rather than by war.

The event was followed by a popular curry lunch, held at the Warley Army Reserve Centre next door, which was hosted by 124 Squadron, Royal Logistic Corps (part of 151 Regiment RLC). Mark, whose father Reginald Francois was a D-Day veteran, serving on a mine sweeper called HMS Bressay, was proud to attend the service, not least in memory of his own father.

Speaking about the special service at Warley, Mark said:

“I had two reasons for attending this commemorative service at the Regimental Chapel in Warley. Firstly, as a former member of the Royal Anglian Regiment, one who was proud to serve his country in uniform, it is a privilege to attend services such as these and to commemorate those who made the ultimate sacrifice to free Europe from Nazi tyranny, three quarters of a century ago this month. In addition, I also had a strong personal reason for attending, in memory of my own father, Stoker First Class Reginald Francois, who was there that fateful morning and whose ship helped sweep the approaches to the beaches shortly after midnight, so that the troops could make a landing from dawn onwards. My father died when I was 14 years of age, but he always drummed into me that we should never take living in a free country for granted – and I sincerely hope that we never will.”