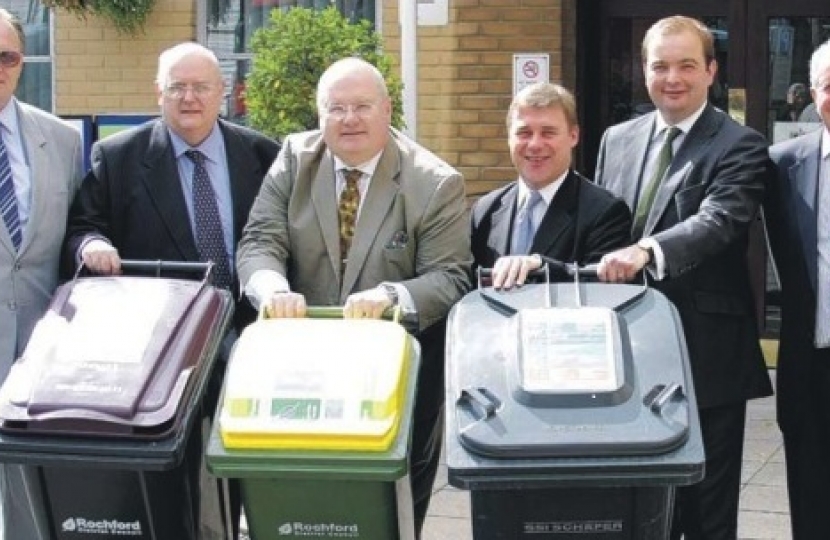 Mark helping show Secretary of State for Communities and Local Government, Eric Pickles MP, the Rochford District Council "three bin" recycling system, which achieved the highest proportion of doorstep recycling in England in both the 2010/2011 (65%) and 2012/2013 (67%) league tables.

Mark believes strongly that we must safeguard the planet for future generations.  He also believes that we should strive to safeguard our local environment in Essex as well.

To begin with, for four years in the 2001-05 Parliament, Mark served on the Environmental Audit Committee (EAC), an environmental watchdog which checks that Government departments and agencies are acting in accordance with sustainable development principles.  Sitting on this specialist committee made Mark much more environmentally conscious than before he entered Parliament. During this time, the EAC produced a major report about sustainable housing, arguing strongly that large-scale house building should not take place without local democratic accountability and the timely provision of supporting infrastructure.

Nationally and internationally, Mark believes that we need a follow-on to the Kyoto Treaty, which includes large nations not currently signed up to the Kyoto process, so that we can hopefully tackle the global problem of climate change on a truly global basis. The recent Paris Accord of 2016 will help in this regard.

The Department for Environment, Food and Rural Affairs (DEFRA) once again placed Rochford at the top of the 2012/2013 league, with a recycling rate of 66.7% and in recent years they have remained in the top three councils in the country for recycling.