They’ve Re-opened the Bull in Hockley! 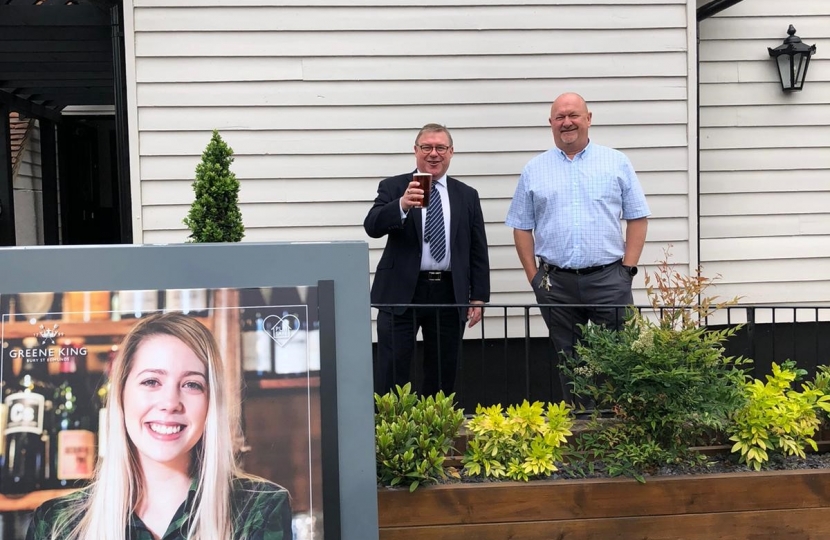 Rayleigh and Wickford MP, Mark Francois, popped along to Hockley on Monday lunchtime to raise a pint in celebration of the re-opening of the 16th Century pub The Bull, which was badly damaged by a fire around two years ago.

After a complete refurbishment, believed to have cost several millions of pounds, the pub has now opened its doors to paying customers again. The first date for the reopening was delayed by Covid-19, with the original date to recommence trading back in March falling just as the country went into Lockdown.

By coincidence, the publican of The Bull, Steve Playle, also attended the same school as Mark, St. Nicholas in Laindon in the 1970s and he eventually married a fellow pupil, Jacqueline Newson, who was in Mark’s year! Mark deliberately wore his old St Nicholas School tie to the reopening, as a reminder to Steve of their schooldays.

Commenting on the reopening of the popular local venue, Mark Francois said:

“In a way, today is a double celebration, as The Bull is a familiar part of the community in Hockley and it has now literally survived both fire and pestilence, in the form of Covid-19. I remember writing to Greene King within a few days of the fire, seeking assurances that they would reopen the pub and they have been as good as their word.

The pub has had a wonderful makeover since the fire and is looking in really good shape.

I would like to wish Steve and his dedicated staff at the Bull all the best of luck as they get fully up and running again. In short, it’s great to know that The Bull has survived and is now back serving the community again - as it has done for very many years.”