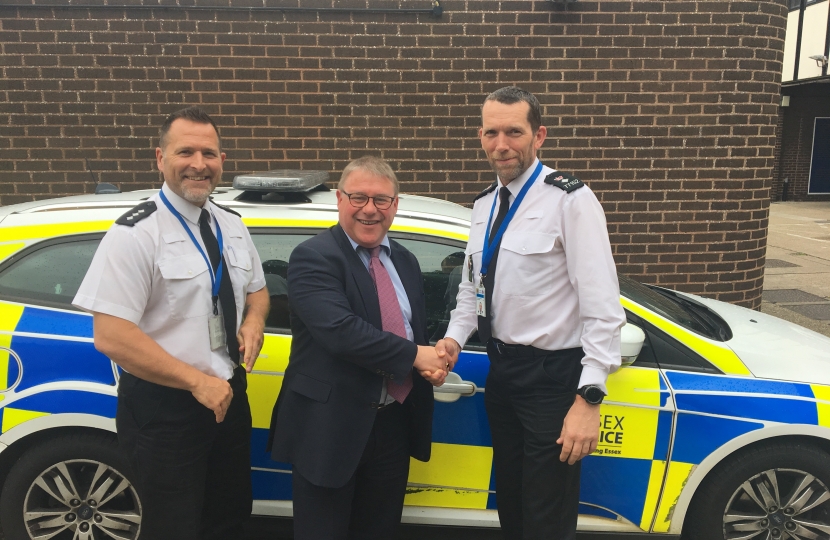 Rayleigh and Wickford MP Mark Francois, held a meeting this afternoon at Rayleigh Police Station, with senior police commanders where he was briefed on their actions to combat an outbreak of serious instances of antisocial behaviour in the town, over the last few months.

Mark discussed the situation in detail with Chief Inspector   Glenn Westley, the District Commander for Rochford and Castle Point division (which includes Rayleigh) and with his new boss, Chief Superintendent Keith Baldwin, the new Essex Police Commander for South Essex, who took up his new post only a few weeks ago.

The three public servants discussed the activities of a small number of aggressive youths, all of whom have been excluded from school and who have been involved in unacceptable incidents of anti-social behaviour, including a recent incident at the Lodge Pub in Rayleigh, where drinkers were violently abused on a pleasant spring evening.

The senior police officers were keen to reassure Mark that they will redouble their efforts to bring these errant youths to justice, including via the creation of a special team of officers to help police the high street in Rayleigh, within the next few weeks. The Officers also asked Mark for help in making representations to Basildon Youth Court to deal with such offences more robustly in future and Mark readily agreed to do so.

Speaking about his meeting with the officers, Mark said:

“In my experience Glenn Westley is a real ‘coppers copper’ and a good local police commander and I was reassured to hear from both him and his new boss of their determination to combat this utterly unacceptable behaviour by a small minority in our town. In essence, I have encouraged the officers to throw the book at these people so that they can no longer be a menace to the law abiding citizens I represent. I will also be making strong representations to the courts to deal with these offenders more appropriately in the future.