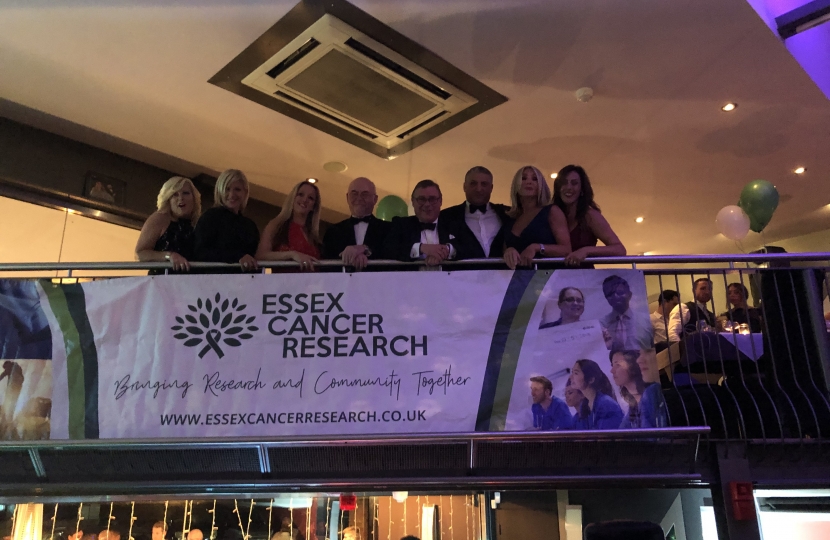 The South Essex MP, was one of well over 100 guests that attended the black tie event at the local dining venue, at which he was able to discuss the very good work that Essex Cancer Research undertakes in helping to fight this awful disease, with John Bruce, the ECR Chairman and the former Chairman of Southend Hospital.

During the evening, guests were invited to raise funds in a number of ways, including a silent auction, for items such as football memorabilia (including a shirt signed by West Ham and England legend, Trevor Brooking) and also a montage including an original ticket from England’s 1966 World Cup triumph at Wembley. Guests were also treated to a live auction, with prizes varying from an exotic holiday in South Africa, to leisure breaks in the United Kingdom.

Overall, the well-attended dinner, raised a sum well into 5 figures for this vital Essex charity and the evening was rounded off by a session of dancing, hosted by a local DJ.

“It was lovely to attend such a very well organised and sociable event, which helped to raise a considerable sum for this vital local charity. Essex Cancer Research are funding leading edge investigations into how to fight this awful disease, almost everyone present was able to tell a story of a friend or relative that had been touched at some point by cancer. The charity is doing tremendous work and as a South Essex MP, I would like to wish them all possible success and to congratulate the organisers on a very well put together evening, which helped to raise a considerable amount of money for such a worthy cause. The Boatyard is a wonderful venue and it was a great night out.”