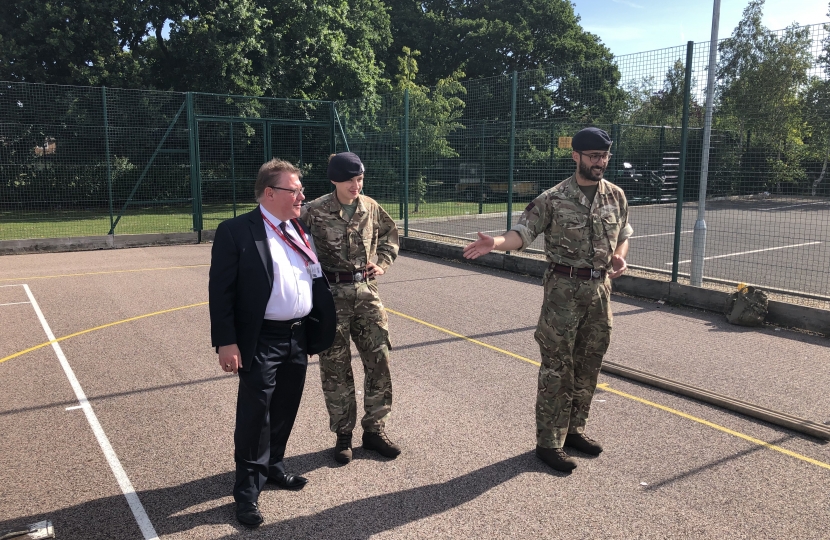 Rayleigh and Wickford MP, Mark Francois, recently took time out to visit Greensward Academy in Hockley, in particular, to see the activity which had been laid on for Greensward Year 9 pupils to investigate future career opportunities, in a number of different sectors of the economy.

The staff at Greensward, who put considerable effort into the day, helped lay on a number of displays by visiting groups and companies, including, Essex Police and some representatives from the British Army, who were encouraging Greensward pupils to consider a future career in the Armed Forces.

As an ex-serviceman himself (Mark served as an infantry officer in the Territorial Army during the Cold War), Mark paid particular interest in the Army display, in which pupils were asked to undergo a military initiative test, to move some precious cargo across a mythical river using a series of ropes, poles and planks, as their sole equipment for the task.

“Greensward Academy, and in particular the staff there, clearly went to a great deal of time and trouble to lay on such a varied and interesting day, which the pupils in year 9, who were participating in the day, really seemed to enjoy. As an ex-soldier, it was good to see the British Army represented and I hope some of the pupils at Greensward might consider a career in the military. In any event, I would like to commend head teacher, Katie Scarnell and all her staff for all the effort they put in to encourage these highly motivated young people to consider the future career path that is right for them. It certainly seemed to be a very worthwhile day.