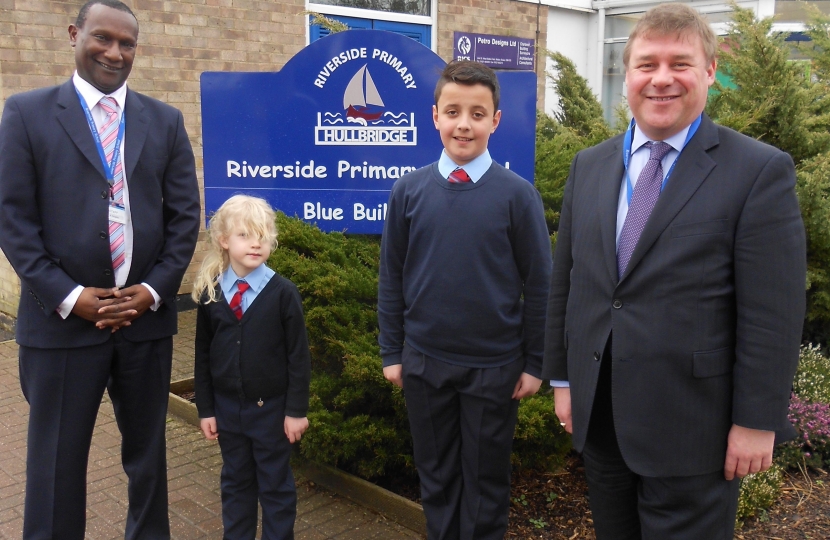 Rayleigh and Wickford MP, Mark Francois, recently paid a visit to Riverside Primary School, in Hullbridge, to meet with the new Headteacher Mr Andy Douglas, who took over the running of the school from longstanding Head, Megan Jenkins, last year.

As well as having an opportunity to meet the new head, Mark attended a school assembly and helped to hand out prizes to pupils for good performance in the classroom. Mark was then taken on a tour of the school by Mr Douglas and saw a number of its features, including the school swimming pool, which is currently closed for the winter but it is used in the warmer months, both for the benefit of pupils and for the wider community in Hullbridge.

Commenting on his visit to the school, Mark Francois said:

“Riverside Primary went through a difficult patch following the merger of the Junior and Infant schools but, I am pleased to say that they have come through that and the school has now been rated ‘good’ by Ofsted. Mr Douglas has ambitious plans for further improving performance at Riverside Primary in order to give Hullbridge children – and indeed some others that come to the school from further afield – a really good education.

As a local MP, I think schools are an important part of any community, they form part of the community’s soul and it is always good to have an opportunity to visit good schools like Riverside Primary and to appreciate the work that goes on there for the benefit of our young people. I look forward to staying in touch with Riverside Primary in the future.”