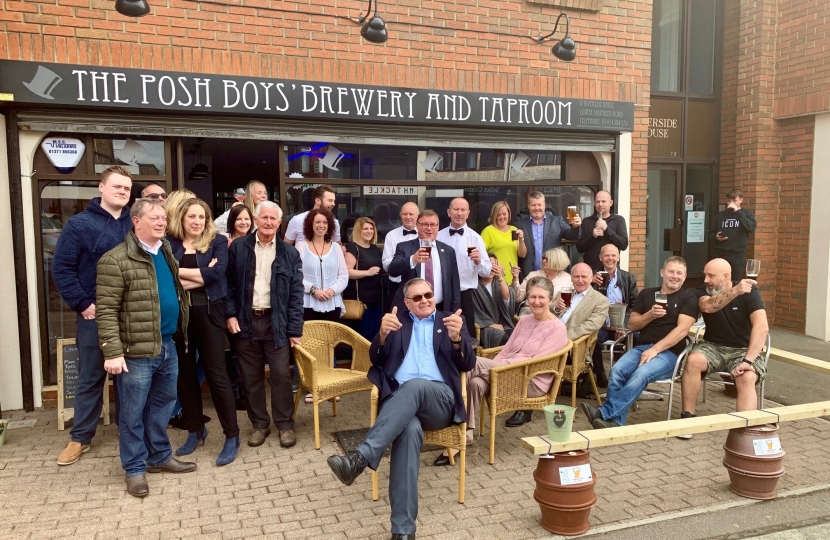 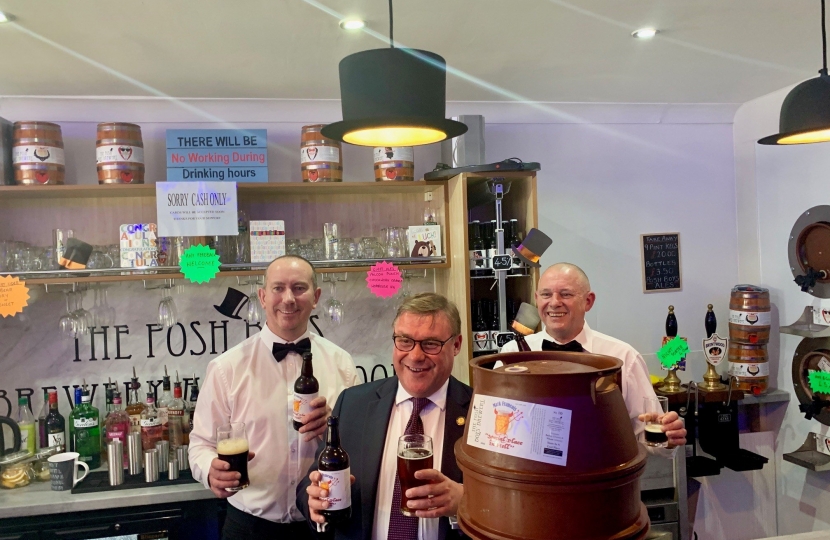 Rayleigh and Wickford MP Mark Francois, performed a very pleasant duty on Sunday afternoon when he opened the new Posh Boys Brewery and Tap Room, just off Wickford High Street. The Posh Boys, Ian and Andy, are two of his constituents from Wickford who have spent several years brewing excellent ale in their back garden but who’s life ambition was to find a shop unit that they could convert into a Brewery and Tap Room – and thus sell their ales direct to the public.

Mark first visited the two brewers a year ago and hearing of their dream, mentioned this to Scott Logan, the Chief Executive of Basildon Council (a Wickford resident) who arranged for the brewers to be assisted by the Council’s Economic Development Team, who helped them to find their new premises (in a disused clothes shop) and to assist with the licensing requirements for establishing a Tap Room.

In return for his assistance in setting up the new facility, The Posh Boys decided to brew Mark a new ale, which they named a ‘Special Place In Hell’, in memory of the President of the European Council, Donald Tusk’s famous phrase which he reserved for Eurosceptics. As Mark is the Vice-Chair of the Eurosceptic European Research Group (The ERG) the Posh Boys thought this would be a very suitable brew.

Mark opened the brewery raising a pint of ‘Special Place In Hell’ to the Posh Boys and in so doing he invited Donald Tusk and all the members of the European Council, including German Chancellor Angela Merkel and French President, Emmanuel Macron to Wickford where he promised he would buy them all a pint of this special ale – on WTO terms – to celebrate when Britain leaves the EU.

“I am delighted to see the establishment of this new micro-brewery in Wickford, which has gone down very well with the towns-folk and has led to a lot of excited chatter on social media. A lot of local people have expressed the view that ‘the new Brewery has helped to put Wickford on the map’ and I am very happy to endorse that ambition. It’s great to have a community facility of this kind in Wickford and initial indications suggest that it is likely to prove extremely popular with my constituents. As for Brexit and a ‘Special Place In Hell’ they came up with the name, not me, but I really would be delighted to invite the European Council to my Constituency to show them not only can we brew great ale, but that we want to live in a free country!”