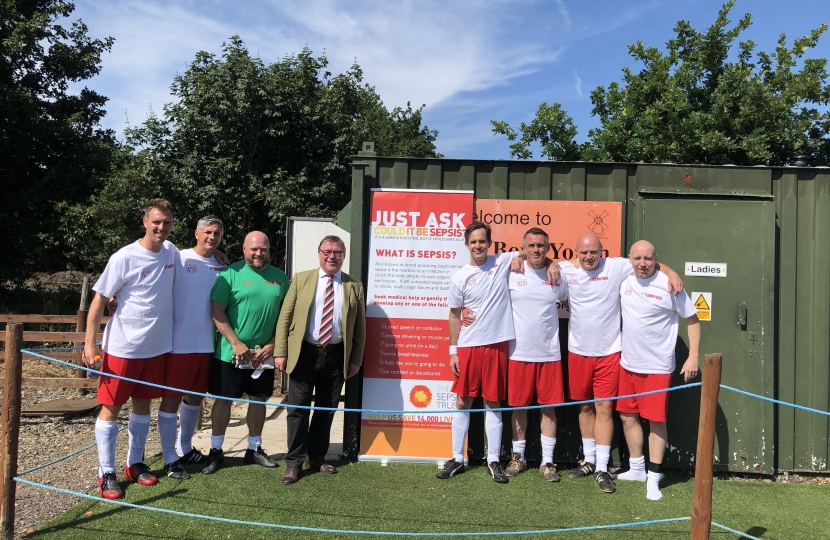 Rayleigh and Wickford MP, Mark Francois, showed his backing for Action to Fight Sepsis, when he visited a special tournament at the Chichester playing fields, organised by Rayleigh FC and designed to raise money for local resident, Lydia Galbally, who unfortunately lost part of her limbs to Sepsis.

The Club, who have committed to helping Mrs Galbally raise money to improve her care (including hopefully fitting some advanced prosthetics in due course), organised a special tournament for the purpose, including a team of sepsis campaigners, led by her husband Dan Galbally. Mark met the team members during the tournament and wished them all the best of luck in their seven aside matches throughout the day.

In the end, the event raised several thousand pounds for the very worthy cause, and Mark was glad to chip in to that total as well. The tournament was the latest successful fundraising event put on, with a recent Ibiza White Party held in Leigh-on-Sea helping to push the total raised to date, to just under £200,000.

“What happened to Lydia was awful and I wanted to publicly demonstrate my support for the campaign, led by her husband Dan, to help to try and raise money to alleviate this dreadful condition. Sepsis is not as widely understood a condition as it should be, and I was also pleased to be participating in the wider objective of raising awareness for Sepsis and the threat it poses to human health. I would like to thank Rayleigh FC for everything they did to make it as successful day as possible. I am hoping to meet with Mr and Mrs Galbally to discuss if there is anything further, that I can do as a local Member of Parliament to assist the family.”