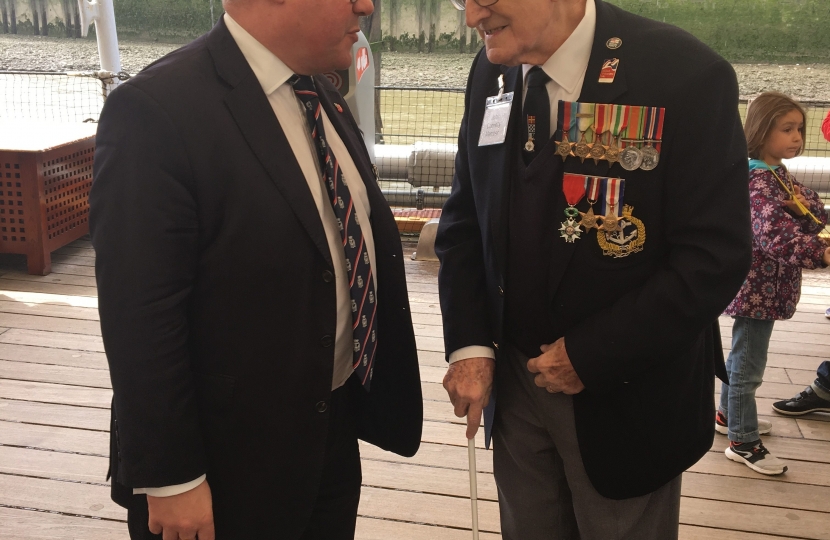 The event was attended by a number of veterans who served in the Royal Navy during Operation Neptune. The occasion was of particular significance for Mark, as his father, Stoker First Class Reginald Francois, was embarked on HMS Bressay, a minesweeper which cleared the path and led the way for the landing craft to begin the land assault on the beaches at Normandy. Sadly, Reginald passed away when Mark was 14 years old.

One of the highlights of the event was the firing of HMS Belfast’s guns at 11:00 to commemorate the historic role played by both the ship’s company and the wider Royal Navy 75 years ago. Those attending then had lunch on the ship, where Mark had the opportunity to listen to some of the humbling experiences of the veterans and discuss some of his father’s memories of the day.

Speaking after the event, Mark commented:

“As the son of a D-Day veteran, it was an absolute privilege to share a meal with a number of veterans who fought to liberate Europe from tyranny on that fateful day. Although my father died when I was still a boy, he drummed into me that you should never take living in a free country for granted – a lesson which I have remembered all my life. We only enjoy our liberty because of the bravery and determination of the men who stormed the beaches three quarters of a century ago. It is right and fitting that we pay tribute to them and the best characteristics of our country, that they will forever represent.”