Minister lays wreath at special service to commemorate MPs who fought and died in WWI. 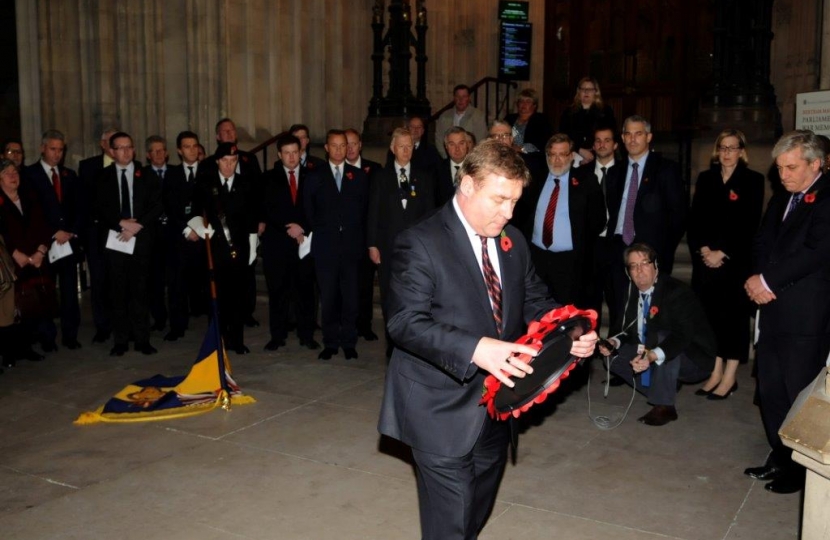 Rayleigh and Wickford MP and Armed Forces Minister, Mark Francois, recently participated in a special service at Westminster to commemorate those 22 MPs who fought and died in the First World War.

The service was organised by Conservative MP, Steven Barclay, and was supported by Mr Speaker, John Bercow, who gave a reading and who also laid a wreath at the WWI Memorial in Westminster Hall.

Among the 22 MPs who gave their lives in WWI was Valentine Fleming MP, a Major in the Queen’s own Oxfordshire Hussars and the father of Ian Fleming, author of the James Bond novels.

A number of MPs from the same constituencies as those represented by their WWI predecessors were also present at the service, to pay their respects.

"There are around 60 MPs currently serving in the House of Commons who have served in the Armed Forces, either as Regulars or Reserves and, this year, as we commemorate the outbreak of the First World War, we wanted to pay particular tribute to those 22 of our predecessors who gave their lives for their country in that major conflict. I was privileged to be asked to lay a wreath on behalf of the Ministry of Defence as part of this important commemoration. MPs fought for their country too and, along with all the other fallen, we will remember them as well."