Mark Hands out Awards to League Winners at Rayleigh FC 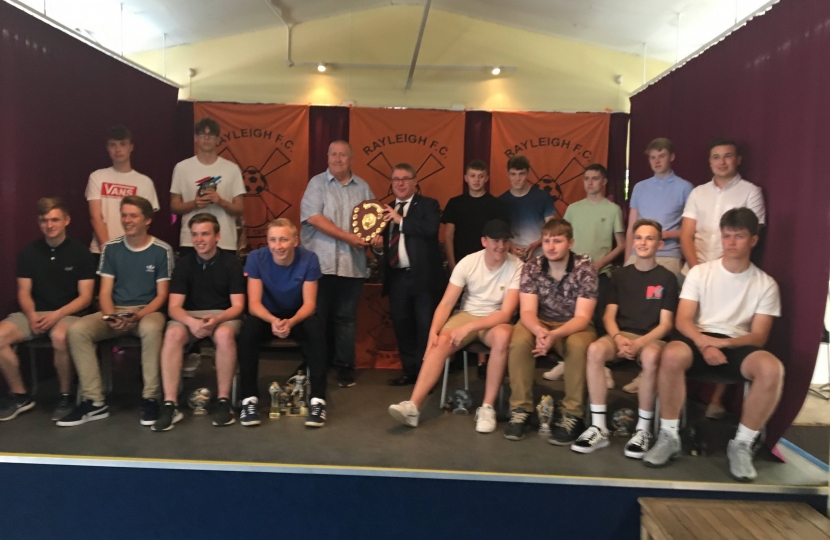 Rayleigh and Wickford MP, Mark Francois, attended the Rayleigh FC end of season awards at the Pope John Paul II Centre in Rayleigh, to help hand out awards to players at the end of the football season, including to two teams who were their respective league champions during the year.

Rayleigh FC (previously known as Rayleigh Boys, but since renamed as they now have several girls teams as well) are one of the largest youth football teams in England, currently fielding almost 60 teams and hoping to grow this number to 70 teams in the next few years. The club has so many players that it takes a whole weekend to present all the awards and Mark joined them for a couple of hours during this process to help to congratulate players and help hand out the trophies.

As part of this, Mark presented the Chairman’s Award to former Chairman, Martin Sheilds, who chaired the club for many years and was instrumental in helping to achieve the success which it has now demonstrated. Mark also handed out champions medals to both the Under 18s (who won their premiership) and also to one of the Under 17 teams who achieved a similar feat in their respective league.

Commenting on his participation in the awards ceremony, Mark said:

“I have had a long association with Rayleigh FC, going back many years and each year they kindly invite me to take part in their awards ceremony each summer. It was a particular pleasure this year to hand out the Chairman’s Award to Martin Shields, who has done such a tremendous amount for the club over the years and also to present two cups and the associated champions medals to two of the club’s award winning teams. I am extremely proud to have a club as successful as Rayleigh FC in my constituency and long may they prosper.”