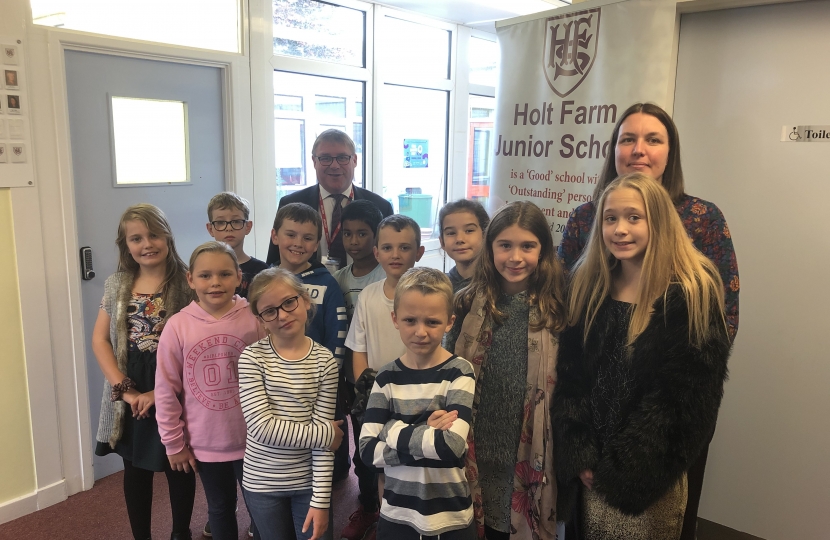 Rayleigh and Wickford MP, Mark Francois, was recently put through his paces on his commitment to the environment, when he paid a visit to Holt Farm Junior School in Hawkwell and was quizzed by members of the school’s ‘Eco-Team’.

The school’s Eco-Team, comprises of two representatives from each class, who take a particular interest in environmental matters, including climate change and who research the latest developments in these areas and then report back to their fellow classmates. During his question and answer session, Mark explained that during his first Parliament, from 2001 – 2005, he served on Parliament’s own ‘Eco-Team’, the Environmental Audit Committee (EAC), who’s role is to ensure that Government departments and public bodies act in accordance with sustainable development principles.

Whilst at the school, Mark also earnt about the school’s ‘Hen Team’, who care for five ex-battery hens, recently rescued by the school and who are named after the Spice Girls. The hens live in a specially constructed hen coop in the school playground.

As a further part of his visit, Mark met with headteacher, Mrs Lucy Wass and her deputy, Mrs Richardson, where they discussed a number of issues relating to the school, including the potential adverse effect on Holt Farm Juniors (and Infants), if the proposed Bloor Homes development on the Ashingdon Road – the access for which would be directly opposite the school – were allowed to go ahead. Mark reassured Mrs Wass and her colleagues of his continued opposition to the development, not least on grounds that it will cause great difficulty for traffic during the rush hour, whilst pupils are arriving for school.

“Its always a pleasure to visit Holt Farm Junior School. The Eco-Team really knew their onions as it were, and asked me some very searching questions about the environment. In reply, I was happy to tell them that Rochford District Council had been the National Doorstep Recycling Champions at least twice in the last decade and also that the Government is committed to reducing greenhouse gasses and to a target of making the UK a carbon neutral society by 2050, if not earlier. Incidentally, it was also fascinating to learn about the school’s ‘Hen Team’ and the fact we have 5 Spice Girls living in my constituency, apparently disguised as chickens. I look forward to remaining in touch with the school in future.”