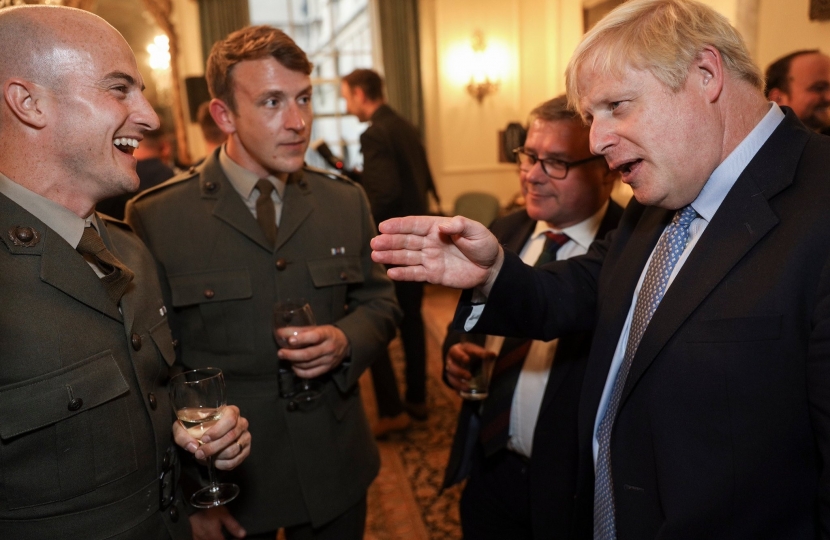 Rayleigh and Wickford MP, Mark Francois, a former Minister of State for the Armed Forces and someone who served in the Territorial Army during the Cold War, was delighted to be invited to a special reception at Number 10 Downing Street recently. The event was held by Prime Minister Boris Johnson, in order to thank current members of the Armed Forces for their service to the nation.

Those attending were drawn from across all three Services and concentrated mainly on personnel from junior and middle ranks, rather than senior officers. The Prime Minister addressed all present, and thanked them for their service, both overseas and at home in the United Kingdom as well.

As a former MoD Minister, Mark was invited along to meet many of the personnel, alongside the current Secretary of State for Defence, Ben Wallace MP and the new Veterans Minister, Johnny Mercer MP, who himself saw active service on several tours of Afghanistan.

Whilst at the reception, Mark took a bet with the crew of the Minesweeper, HMS Middleton, that he would not be able to mention their ship’s pet tortoise, “Jethro”, when appearing later that evening on the Robert Peston show on ITV. Mark duly did so on camera in the studio and won the bet!

“As a former Veterans Minister in the MoD and then Armed Forces Minister after that, it was a privilege to meet serving personnel in HM Armed Forces. It was very good of the Prime Minister to invite these brave people to Number 10 and to thank them for their Service, on behalf of a grateful nation. As ever with Service Personnel, there was a good degree of banter and I am delighted to say, that as my father served on a minesweeper in the Second World War, I was able to both take and subsequently win a bet with a minesweeper crew. It really was great to be part of such an enjoyable function and to be able to thank these brave people for everything they do to keep us safe.”