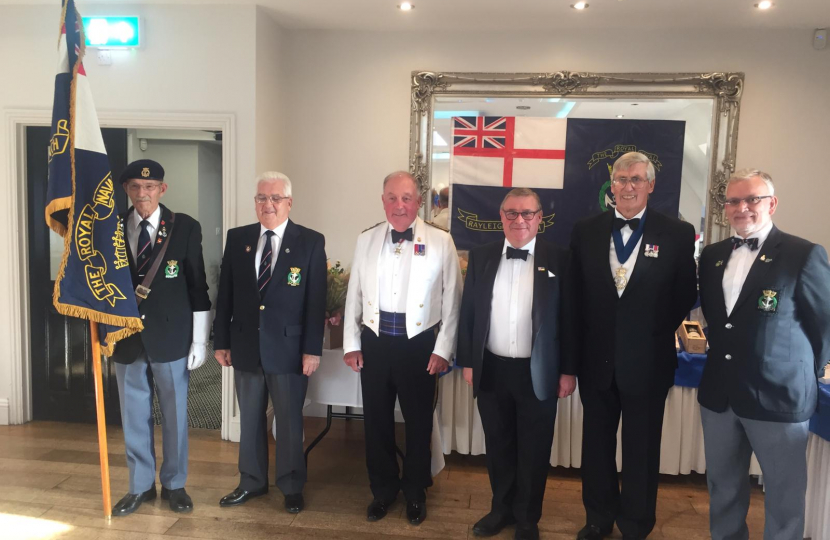 The Rayleigh Branch of the Royal Naval Association (RNA) held their annual mess deck supper at the Rayleigh Club on Hullbridge Road, with Vice Admiral John McAnally, the past President of the National RNA, as their guest on honour.

Mark, who served as a Territorial Army infantry officer during the Cold War, is also an honourary member of the Rayleigh Branch of the RNA, by virtue of his father Reginald Francois’ service in the Royal Navy, during World War II (including at D-Day).

The well-attended dinner, which drew over 100 guests to the Rayleigh Club on a beautiful summer’s evening, was presided over by Mr Terry Barker, the Chairman of the Rayleigh Branch and was also attended by Mr Keith Ridley who is the present National Chairman of the RNA, which currently incorporates over 14,000 members nationwide.

“It was a pleasure to attend the Rayleigh RNA Mess Desk Supper, which was a really fun evening, including a great deal of naval banter among the veterans and not least Admiral McAnally, who is a hilarious after-dinner speaker. As my father was a naval veteran, I am privileged to be an honourary member of the Rayleigh RNA who are a very friendly and lively bunch.”