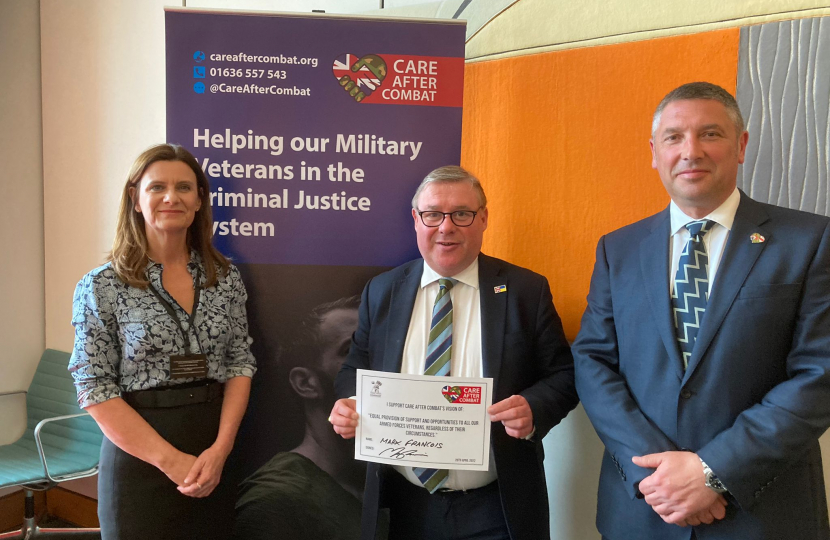 Care After Combat is a charity that provides support within the Criminal Justice System for the wellbeing of former British Armed Forces personnel and their families. The team consists of a small number of full-time and part-time staff, working together with volunteers across an extensive area of operations.

The Impact Report highlights the positive difference Care After Combat's work has made on veterans across the country, who have found themselves in the criminal justice system and are in need of support.

As a young charity, this is the first Impact Report to be produced by Care After Combat. It covers the period since the charity became operational in 2015, up to the end of 2021.

The event was well attended, and many MPs pledged to support Care After Combat's vision of "equal provision of support and opportunities to all our armed forces veterans, regardless of their circumstances."

After the event, Mark Francois MP commented “As a former Veterans Minister, it was a pleasure to meet the Care After Combat team and hear about all the positive difference that they are making for veterans up and down the country. The work they do is phenomenal, and they continue to help and support so many in our armed forces community. I strongly support its vision of equal provision of support and opportunities to all our veterans, regardless of their circumstances.”

MARK FRANCOIS MP “SCALES THE HEIGHTS” DURING VISIT TO AMAZON

Rayleigh and Wickford MP Mark Francois, had a chance to view one of the largest solar powered roof arrays in Europe, during a recent visit to the Amazon fulfilment centre at Tilbury.