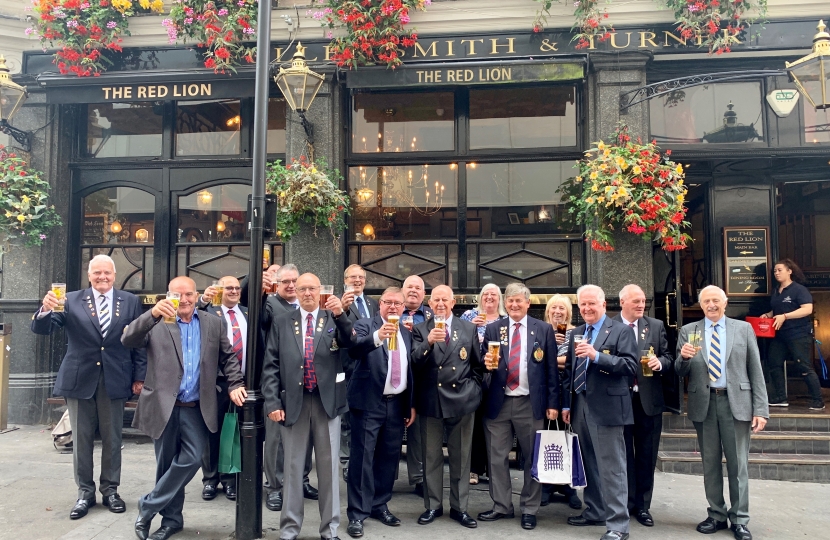 Rayleigh and Wickford MP, Mark Francois, recently took advantage of a day during the Parliamentary recess to host a group of military veterans on a tour of the Palace of Westminster.

The veterans were from the Basildon and District Military Veterans Breakfast Club, a group of ex-servicemen and women who meet together once a month in Basildon, to enjoy a hearty breakfast and a degree of camaraderie, based on their previous service in HM Armed Forces.

The visit came about following Mark’s attendance, alongside his colleague Stephen Metcalfe MP, at the Veterans pre-remembrance breakfast in October last year. Whilst there, Mark offered the veterans the opportunity to tour the Palace of Westminster and promised to buy each of them a pint if they did so – something they were very keen to remind him of when they recently came up to see the Houses of Parliament for themselves.

As the Commons Strangers Bar was closed during the recess, Mark improvised by taking the group of around 15 or so veterans, around the corner to the Red Lion pub, on Whitehall – which serves as Parliament’s own ‘local’ when the House is not sitting. As part of their day, the veterans had the opportunity to visit both the House of Lords and House of Commons chambers, along with Westminster Hall and other features of the Parliamentary Estate.

“As these people have served Her Majesty in uniform, it was a privilege to arrange a tour for them of the Palace of Westminster and then to take them for a drink afterwards. I promised back in October that I would stand them a pint if they came to Westminster and I was pleased to keep my word. The Basildon club is one of a number of military veterans’ breakfast clubs springing up around the country – I recently attended a new one in Wickford as well – and I think it’s wonderful that ex-service personnel have a chance to get together and exchange some banter too. There is also a serious point to all this, as the veterans make a very valuable contribution all year round, attending funerals of ex-comrades and Remembrance Sunday events. These people have done good work for their country and I was honoured to have them at Westminster.”