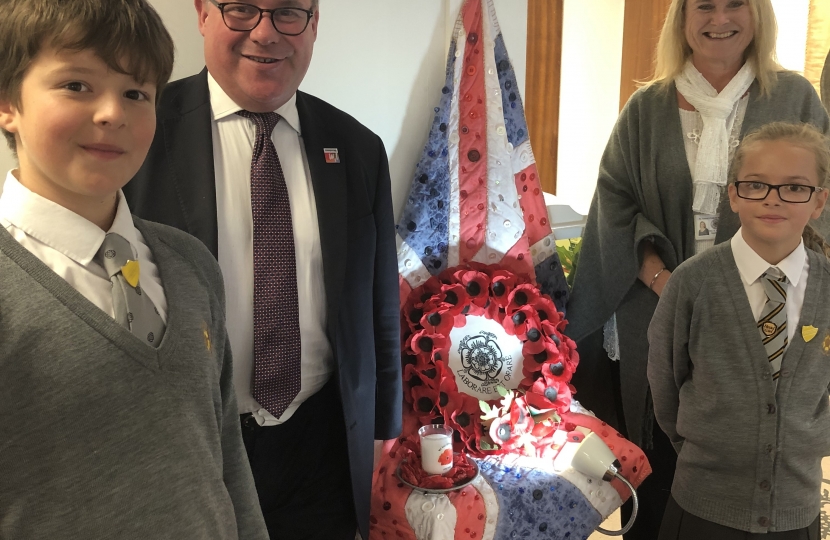 Rayleigh and Wickford MP, Mark Francois, met pupils who are preparing to commemorate Remembrance Sunday, when he paid a recent visit to St Theresa’s Roman Catholic Primary School, on Ashingdon Road, in Hawkwell.

During his visit, Mark met with the headteacher Mrs Nikki Paterson, who has led the school very ably for over a quarter of a century. Mark discussed a number of issues with the headteacher, including the schools continuing rating of ‘good’ by Ofsted, its ongoing determination to provide a good faith-based education and also the issue of potential increases in traffic if the Bloor Homes development off the Ashingdon Road were allowed to go ahead.

Following his meeting, Mrs Paterson took Mark on a tour of the school, where he witnessed a number of lessons in progress and then had an opportunity to meet with some of the senior prefects who are helping to organise the school’s commemoration of those who died in the two world wars, and in subsequent conflicts.

“This is a lovely school, which has been incredibly well led by Mrs Paterson for over 25 years and it is clear that she is extremely popular with both staff and pupils alike. I was pleased to hear that the school is continuing to thrive, and I was also impressed that their students have a clear commitment to Remembrance and to commemorate those who have died so that we may be free. I very much look forward to remaining in touch with all at St Theresa’s in the future.”