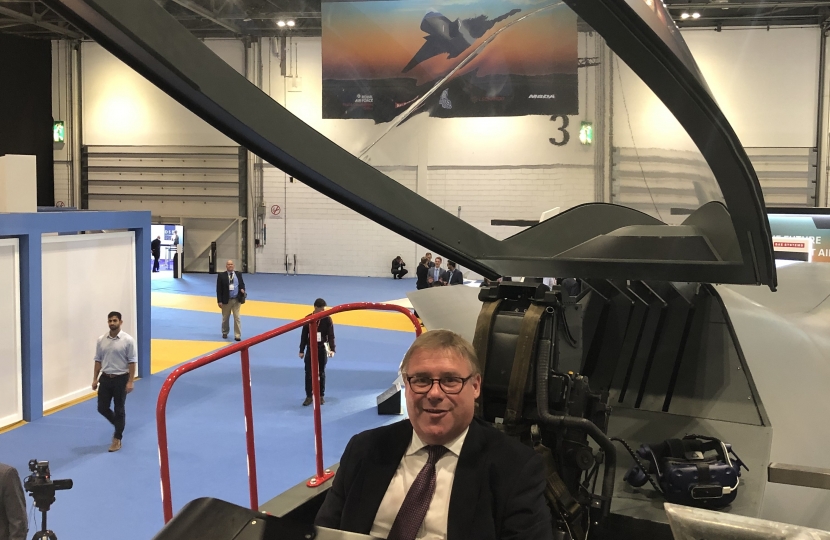 Rayleigh and Wickford MP and former Armed Forces Minister, Mark Francois, recently had an opportunity to sit in the mocked-up cockpit of the RAF’s proposed 6th Generation ‘Tempest’ super fighter, being built by a consortium of European and international companies, led by Britain’s BAE Systems.

The new 6th generation Jet, which is intended to replace the RAFs Typhoon fighters from the 2030s onwards, is an international collaborative programme, designed to produce the most advanced combat aircraft in the world. Once in service, Tempest will have both air to air and air to ground capabilities and will help the RAF support its commitments to the defence of the realm and contribute to wider missions with international partners around the globe. The Italian Government have recently signed up to the Tempest Fighter, which could result in increased work for Leonardo’s plnt at Christopher Martin Road in Basildon.

The Tempest programme, which was announced a year ago at the Farnborough Air Show, will help maintain the United Kingdom at the leading edge of military aircraft manufacturing, with a proud heritage, going back through to the Supermarine Spitfire of World War Two and the Sopwith Camel from the First World War.

Speaking about his opportunity to sit in the ‘Top Gun’ Cockpit, Mark Francois MP said:

“Tempest is a critically important future programme both for the Royal Air Force and for our international allies as well. Given recent developments in Russian and Chinese Fighter Technology, we cannot take our competitive edge for granted. Even though our current Typhoon is an extremely advanced aircraft, Tempest is designed to build on that success to design a world beating aircraft to keep the skies safe for democracy in the future. Leonardo’s plant in Basildon is also likely to be involved in the Tempest programme and so I am particularly keen to see it succeed as a local MP, as well as a former Armed Forces Minister.”