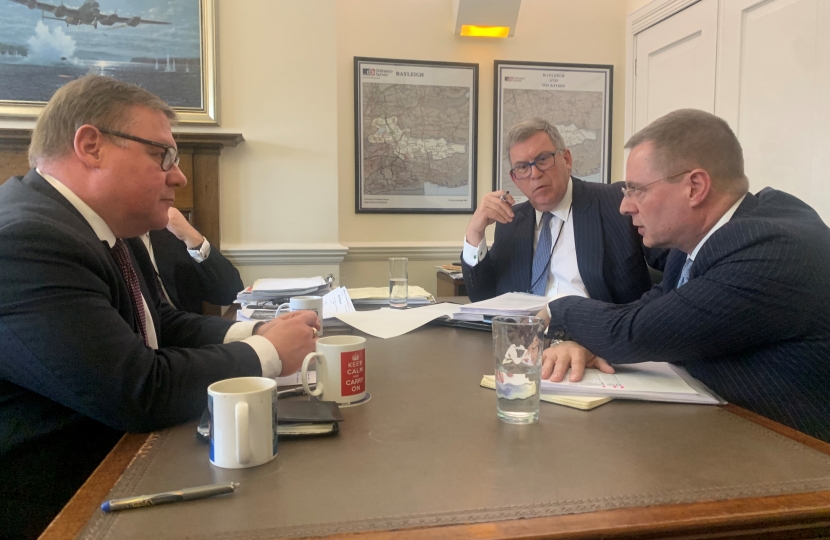 Rayleigh and Wickford MP, Mark Francois, recently held a meeting in his Westminster Office, with Sanctuary Group, the major Registered Social Landlord in Mark’s Constituency, where the local MP pressed them on their poor repair performance. Present at the meeting was Sanctuary Chief Executive, Craig Moule and newly appointed Chairman, Andrew Manning-Cox.

During the discussion, Mark presented Sanctuary’s Chairman with a two-inch-thick file of complaints he had received over the last year from his Constituents, who are Sanctuary’s tenants. Mark pressured the two leaders to “raise their game substantially” in order to provide a better maintenance service, in return for the rents that they receive.

Mark called the meeting after having previously been highly critical of Sanctuary in a debate in the House of Commons last July - but unfortunately having seen little improvement in Sanctuary’s performance since then. As part of the meeting, Mark also challenged Sanctuary to speed up their programme to provide affordable housing to people on the housing waiting list, an area in which they have previously been very poor.

“I am disappointed that after all the assurances I received from Sanctuary last year, their maintenance performance is still way below par. I hope this new management team will shake up the organisation and that things will get better from now on. I will continue to hold Sanctuary’s management to account until matters improve.”