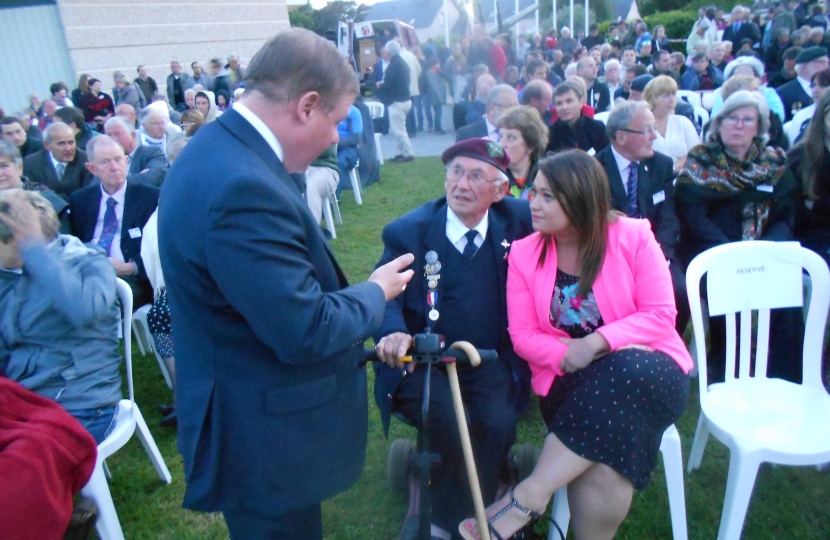 Rayleigh and Wickford MP and Armed Forces Minister, Mark Francois travelled to Normandy recently to play a part in the events to commemorate the 70th anniversary of the D-Day Landings, which began the process of liberating Europe from Nazi Germany.

Mark attended several events over the course of three days including a midnight vigil at Pegasus Bridge (where the first British gliders landed at just past midnight on D-Day itself), the United States ceremony at Colleville (near Omaha Beach) where he represented the British Government and heard speeches by President Obama and President Hollande of France; a small ceremony at Pont Du Hoc (a German gun battery which overlooked the beaches) and also the Canadian led commemoration at Juno Beach, on the evening of June 6th.

The events were particularly poignant for Mark as his father, Reginald Francois, served on a minesweeper, HMS Bressay, on D-Day which was part of the task force that swept the invasion beaches very early in the morning, to clear a path for the landing craft.

"I was very pleased to participate in this important commemoration of those men who risked everything in order to free Western Europe from tyranny. It was also poignant for me because I always remember my father on occasions like this and I am proud of the fact that he took part in the liberation of Europe. All of the men who participated in D-Day did us a great service in the name of freedom and it is very important that we commemorate them on occasions such as this."