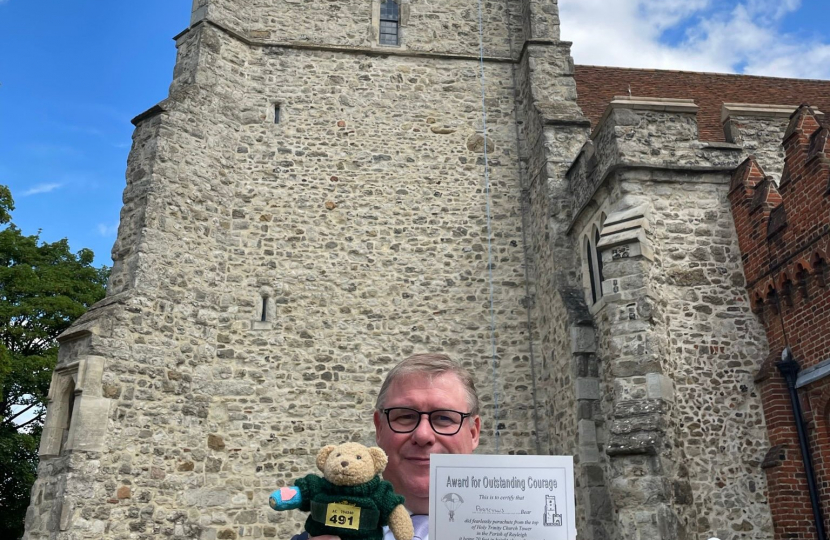 Rayleigh and Wickford MP participated in the recent highly successful “Teddy Bear’s Parachute Jump” at Holy Trinity Church in Rayleigh, by entering his Parliamentary mascot, a bear named “Portcullis” in the leap from the 100ft tall church tower.

Mark serves as the President of the Friends of Holy Trinity, who organised the novel charity event, to help raise funds towards the upkeep of Rayleigh’s part 14th century parish church.

Local families were encouraged to enter their favourite bear (some of whom were sponsored in advance) to descend by specially designed mini parachutes from the church tower. Any bears injured during the leap were rescued by young volunteer “paratedics” and rushed to the specially established “tedical centre” in the church grounds, for treatment.

The recent event, which happily resulted in no bear fatalities, raised around £3,000 for the Friends, as well as providing a fun family day-out for people from across Rayleigh and beyond.

“I would like to commend all those volunteers from the Friends of Holy Trinity who worked so hard to make this popular event a success and, in the process, raised a very valuable £3K to help maintain this iconic church, at the top of Rayleigh High Street. I am also proud of Portcullis (named after the emblem of the House of Commons) for courageously leaping into the unknown, alongside many other bears, a small crocodile and at least two miniature dinosaurs, for such a very worthy cause.”