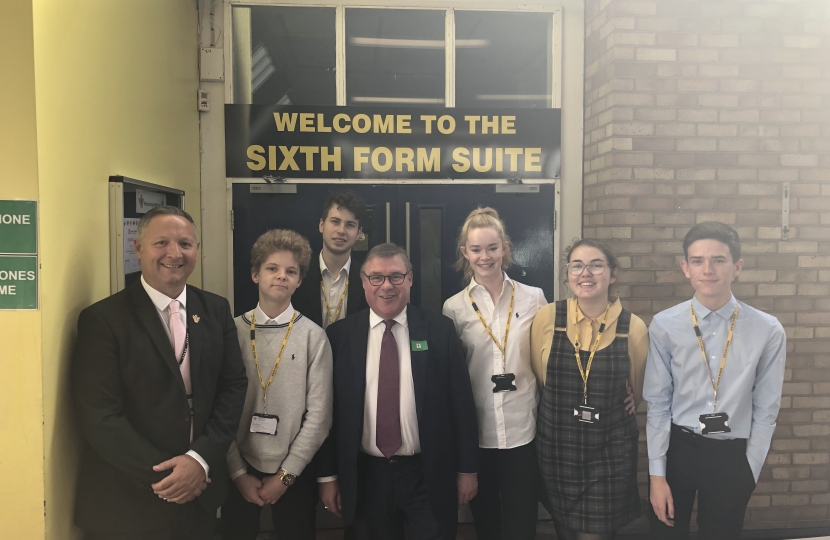 Rayleigh and Wickford MP, Mark Francois, recently had an opportunity to meet sixth formers studying politics for their A-Levels, when he paid a visit to Beauchamps High School in Wickford.

Mark began his visit, with a meeting with Headteacher, Mr Matt Harper, where they went through a number of issues, including the schools very good exam results from the summer and the development of sport at school, including the very regular use of the school’s 3G football pitch, which Mark officially opened a little over a year ago.

Following their meeting, Mark was taken on a tour of the school by Mr Harper, when he bumped into several old friends, including one of the dinner ladies, Sally, who he used to be at school with in Basildon, and also the school caretaker, who was one of Mark’s soldiers in the platoon he commanded, when he was an infantry officer in the Territorial Army during the Cold War!

On top of these encounters, Mark also had an opportunity to have a discussion with A-Level politics students, who were in the school refectory, whilst on the tour. A number of these Beauchamps students asked him some searching questions, on everything from Brexit to school funding. In return, Mark offered to arrange a visit for them to the House of Commons, some time in the New Year.

Commenting on the visit to Beauchamps, Mark said:

“I have 33 schools in the Rayleigh and Wickford Constituency, and I do ty to visit them as regularly as possible. As part o this, I was delighted to go to Beauchamps recently, and to have a very constructive visit, whilst also bumping into some people I haven’t seen for over 20 years! It was also a pleasure to meet with some of the bright and very enthusiastic sixth form pupils at the school and to try and aid them in their study of politics, I would be delighted to welcome them to Westminster sometime in 2020. I would like to thank Mr Harper for helping to organise both an enjoyable and informative visit to what is a very good school.”