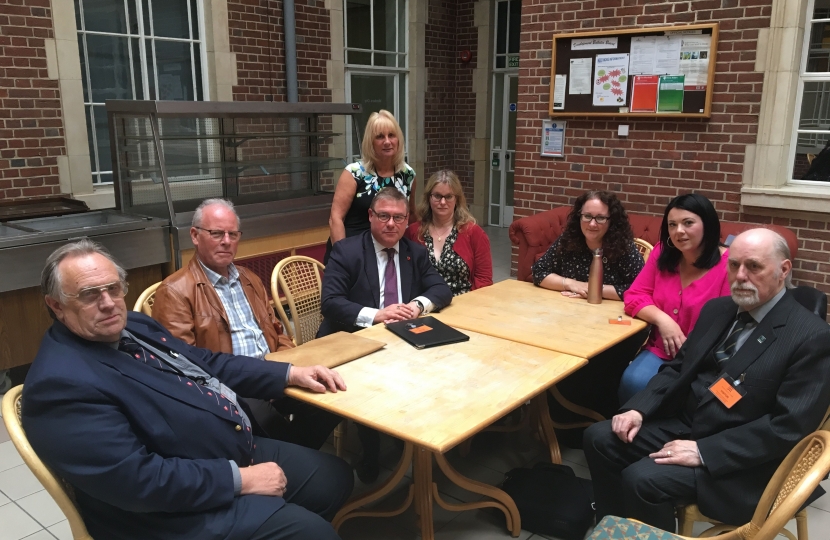 This afternoon, Rayleigh and Wickford MP Mark Francois led a delegation of local councillors and community campaigners to County Hall in Chelmsford for a meeting with County Councillor Susan Barker, the Cabinet Member for Customer, Communities, Culture and Corporate to discuss the future of libraries in Essex and in particular Hockley Library and Hullbridge Library in Mark’s constituency.

The meeting, which lasted for over an hour, included what diplomats would call a ‘free and frank exchange of views’ about the need to keep both libraries open. Not just, however, as educational facilities but as vital community hubs, for everything from Mums and Toddlers groups to the U3A. County Councillor Barker told the delegation that no decisions have yet been taken and that a paper by Essex County Council’s Cabinet on what to do next regarding libraries is now due to be published around mid-July.

Mark has been a long standing advocate of the campaigns to keep both Libraries open, having recently attended a book sale at Hullbridge Library to boost much needed funds for the campaign.

“Everyone at the meeting made their points in their own way, sometimes, quite passionately, so I hope between all of us, we managed to convey the very strong feelings in both communities about this issue. I concluded by asking County Councillor Barker to reconsider the whole policy of closing libraries in Essex as I didn’t think the relatively modest sums of money that would have been saved is worth the distress it has caused local residents. I will be following up this meeting by writing to CC Barker to reiterate some of the points that were made. I will subsequently publish this letter on my Facebook page, so that my constituents can see for themselves what I have done. I would like to thank all those who attended the delegation to make their case and I hope and believe that common sense may yet prevail.”