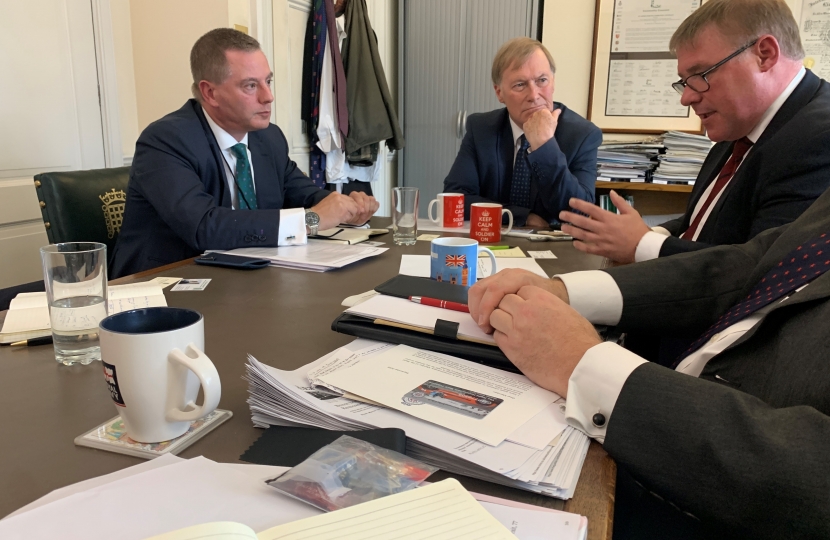 Rayleigh and Wickford MP, Mark Francois, recently held a meeting in his Westminster office, with the senior managers of the Sanctuary Housing Group, in order to press them on a number of issues, including a poor maintenance service to their tenants, who are his constituents and their failure, to date, to build the promised number of units of affordable housing in the Rochford District, to help ease housing waiting lists. Mark was strongly supported at the meeting by his friend and Parliamentary colleague, Sir David Amess MP.

The top bosses of Sanctuary, Chairman Jonathan Lander and Chief Executive Craig Moule, who are headquartered in Worcester, are responsible for over 100,000 properties under management across the UK, making them one of the largest registered social landlords in the country.

Mark called the meeting after having previously been highly critical of Sanctuary in a debate in the House of Commons on 13th July 2019. During the meeting, Mark pressed Sanctuary’s management hard on their need to improve their maintenance service to tenants. Mark also challenged Sanctuary to honour a commitment given around a decade or so ago (when tenants voted to transfer their properties from Rochford District Council to Rochford Housing Association – now part of the Sanctuary Group) to build 50 new units of affordable housing a year, in order to reduce pressure on the waiting list and to try and prevent families being sent to bed and breakfast accommodation in Southend.

The meeting lasted for well over an hour and Mark sought a number of commitments from Sanctuary’s management to try and improve their performance in future and to speed up their programme to provide affordable housing for people on the housing waiting list.

“I make no apologies for giving the management of Sanctuary a really tough time, when we met in my Westminster office. The Group provide a poor repairs service to my constituents and I am now forwarding copies of every single complaint personally to the Chief Executive, Mr Moule, at Worcester, so he can see for himself where his organisation is falling down on the job. In addition, I am also pressing the company hard to redouble their efforts to honour their pledge of building 50 units of affordable housing a year – so that we can hopefully get families out of temporary bed and breakfast accommodation in Southend, which is both undesirable and very expensive for the council tax payer. I subsequently criticised Sanctuary again in a debate in the Commons, following this meeting and I have now asked for a further meeting with Mr Moule and the incoming Chairman, Mr Andrew Manning Cox – which we are hoping to organise for some time next month.”