Mark Francois MP backs Boris to be next Tory Leader 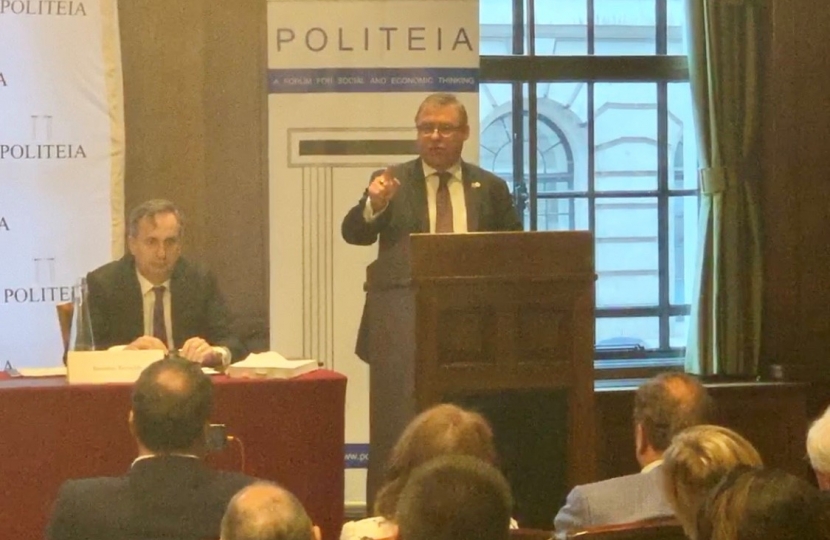 Mark Francois, Member of Parliament for Rayleigh and Wickford and Vice-Chairman of the European Research Group has today, announced his support for Boris Johnson’s candidacy to become the next leader of the Conservative and Unionist Party and Prime Minister of the United Kingdom.

The announcement was met with applause at an event run by the Think Tank, Politeia. The event was based on the themes surrounding leading Euroscpetic, Martin Howe QC’s new publication, ‘Avoiding the Trap – How to Move on from the Withdrawal Agreement’.

In his speech at the Conference, Mark said that the new Prime Minister must restore faith in UK democracy – by leaving the European Union on the 31st October 2019 and should be utterly adamant about that fact with our Continental Partners. Mark went on to say that Britain should also be prepared to withhold most if not all of the £39 billion, until the EU has agreed to a comprehensive Free Trade Agreement (FTA).

“The Withdrawal Agreement is now Akin to Monty Python’s famous Dead Parrot. It is vital that that the next Prime Minister enter office with a clear and deliverable plan and does not return to this fatally flawed document that has already been voted down three times. Having met with most of the potential Candidates, I wholeheartedly believe that Boris Johnson MP is the person best placed to facilitate our exit from the European Union, on 31st October 2019 and restore faith in our democracy in the process. That is why I will be voting for Boris to be our next Prime Minister.”