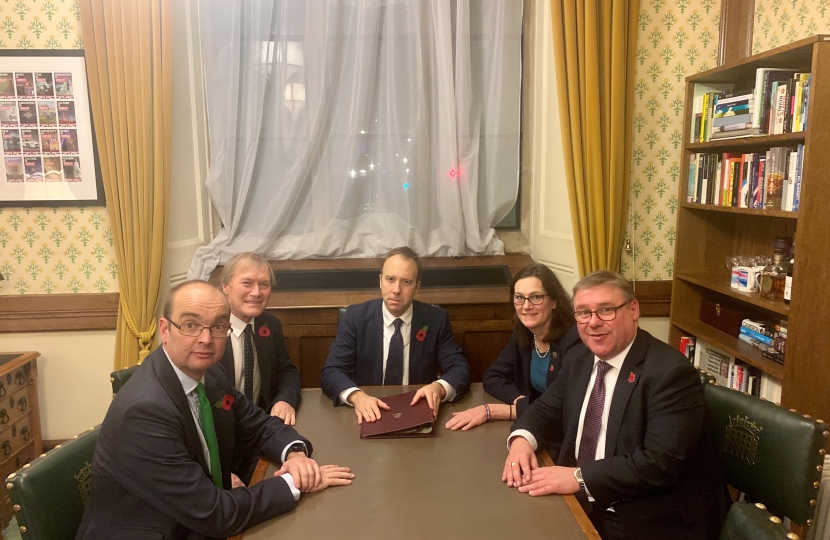 Local Conservative MPs, Sir David Amess, Mark Francois, James Duddridge and Rebecca Harris, held a meeting with the Health Secretary, Matt Hancock MP, at the House of Commons this afternoon, where they were delighted to hear that he has used his powers as the Secretary of State, to reclaim a pay off of around £200,000, to a senior NHS bureaucrat – merely for taking a sideways move within the NHS, from one similar job to another.

Ian Stidson, left his job as the Accountable Officer (in effect, the Chief Executive) of the Southend Clinical Commissioning Group (CCG) last year, transferring across to take up a similar appointment with the Thurrock CCG. As revealed recently by the Echo Newspaper, for this he was given a redundancy payment in the order of £150,000 and also a salary payment in lieu of notice of over £50,000 – making a combined total of around a fifth of a million pounds, which otherwise could have been spent on patient care.

Local MPs reacted rapidly to the revelations in the Echo and immediately lobbied the Secretary of State for Health, Matt Hancock MP, to act to make Mr Stidson pay the money back. Legislation passed by the Conservative Government a few years ago allowed the Secretary of State to intervene in such cases and Matt Hancock rapidly took action to make sure that both tax payers and patients were protected.

Speaking about the Secretary of State’s intervention, in a joint statement, the 4 South Essex MPs said:

“We would like to thank the Health Secretary for reacting to the Echo’s revelations and for intervening so rapidly to claw this money back. As a result, our hard-pressed local NHS will now have an extra fifth of a million pounds which they can spend on patient care. This is a victory for common sense and hopefully the people of South Essex will benefit as a result.”

“I am pleased that because of legislation passed under the Conservative Government, I have the power to intervene in cases like this. I have therefore exercised my authority as Health Secretary to reclaim this money, which can now be spent on patients instead. I would like to thank the Echo for a strong piece of investigative journalism and local MPs for bringing this to my attention, so that I then had the opportunity to do the right thing.”