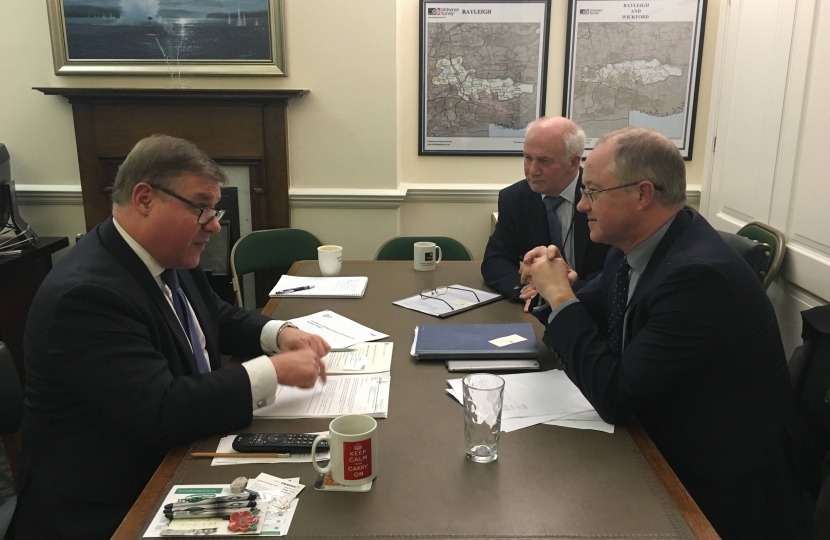 Rayleigh and Wickford MP Mark Francois met with the Chief Executive of Network Rail, Mr Andrew Haines, and the areas Chief Operating Officer, Mr Steve Hooker, in his Parliamentary Office to discuss the ongoing engineering works on the Southend Victoria line. At the meeting, Network Rail agreed to complete the work by March 2020, over a year earlier than previously planned.

The meeting, which was as a result of a debate Mark held in the House of Commons in October regarding the works, enabled Mark to express the frustration of his constituents over the ongoing line closures at weekends and weekday evenings, directly to both Mr Haines and Mr Hooker. As a result of the debate, Network Rail held internal meetings which have enabled them to add additional resources to the works and create a plan to end the work much earlier.

The majority of the work will now take place late on weekday evenings but starting later than previous closures. There will also be work on Sunday mornings, only in July and August 2019, and one week of “blockade” (no trains) following the last May bank holiday. In addition, the number of engineers working on the line will increase to 120 people, with a maximum of 150-160 engineers during the blockade. The plan is subject to final agreement with the service operator, Abellio Greater Anglia.

Commenting on the meeting, Mark said:

“I had a very cordial and useful discussion with Network Rail and was informed by Andrew Haines, that following my adjournment debate on this issue last autumn this had led to a lot of internal debate in Network Rail about how they could speed up the whole process. As a result of that, they are applying more resources to the task, which means they can end the engineering work over a year earlier than originally planned (for May 2021). I hope my constituents will be pleased at this news and while I accept there will be some disruption to people travelling home late at night, the fact that we get most of our weekends back, I think is very welcome.”