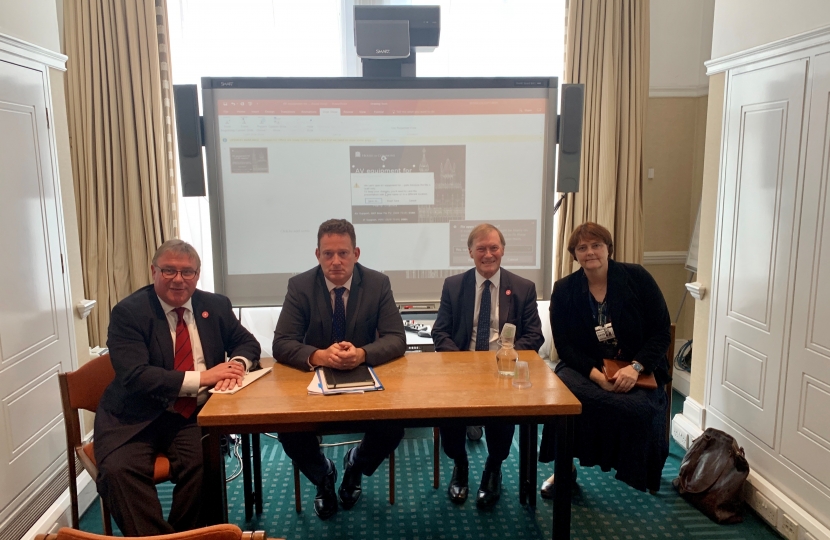 A number of Essex Members of Parliament, chaired by Sir David Amess MP, the Member of Parliament for Southend West, hosted the Chief Constable of Essex Police, Ben Julian Harrington, at a special briefing meeting recently, in Westminster.

The Chief Constable was accompanied at the meeting by Jane Gardner, the Deputy Police Fire and Crime Commissioner, who was representing her boss, Commissioner Roger Hirst at the gathering.

Several MPs, including Mark Francois, from Rayleigh and Wickford and James Duddridge, from Rochford and Southend East, raised questions with the Chief Constable regarding policing in Essex and the arrival of some 300 extra police officers, as first inspired by the Crime Commissioner Roger Hirst. This will then be reinforced by Essex’s share of 20,000 additional police officers across the country, as ordered by incoming Prime Minister, Boris Johnson. The Chief Constable estimates that Essex’s share of these officers will be between 400 – 500 officers.

Whilst at the meeting, Mark raised in particular, the issue of recent instances of antisocial behaviour in and around his constituency and thanked the Chief Constable for recently visiting Rayleigh to see some of these matters for himself.

“I am grateful to my Parliamentary colleague, Sir David Amess MP, for chairing a successful discussion at Westminster, where we were able to voice a number of issues on behalf of our constituents to both the Chief Constable and the Deputy Police Fire and Crime Commissioner simultaneously. Its very helpful to have these opportunities as local MPs to raise these issues with Essex’s top cop and also the leadership of the Police Fire and Crime Commissioner’s department, as a way of getting through to these senior people, some of the concerns of the constituents that we represent. It was very good of the Chief Constable and his colleague to find the time to come to the House of Commons and I hope we will be able to continue this dialogue into the future.”