A Bridge too Far – Well Not Anymore! 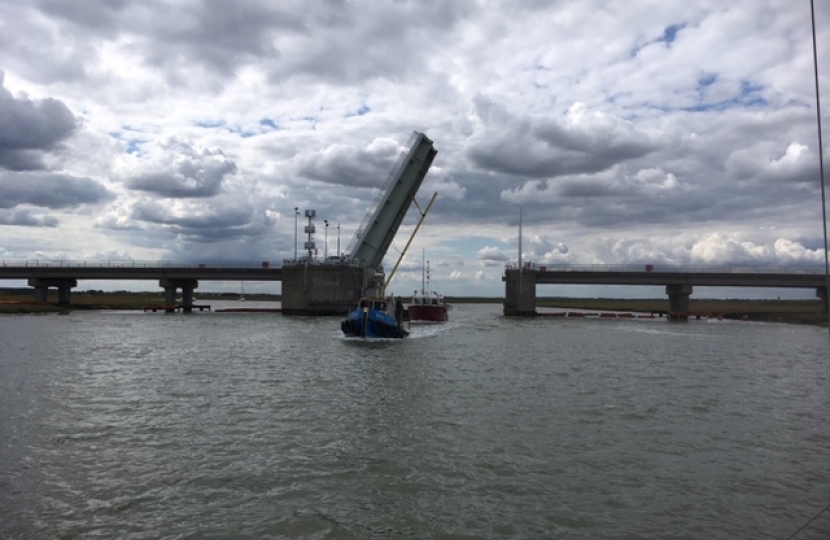 Rayleigh and Wickford MP, Mark Francois, has today welcomed the news that Havengore Bridge has re-opened to navigation, after a complete revamp by QinetiQ, who run the Shoeburyness Ranges, on behalf of the Ministry of Defence.

Mark, as the local MP, has spent a number of years lobbying both QinetiQ and the MoD, holding numerous meetings with the various stakeholders involved, including with Ken Wickham, the Chairman of the Crouch Harbour Authority (CHA) Advisory Committee on getting the bridge fully up and running again.

The bridge has now undergone a comprehensive refurbishment of the mechanical, hydraulic and electrical components and the control system has also been upgraded. This improvement work represents a significant investment from the MoD/QinetiQ, to modernise and bring greater resilience to the previously unreliable mechanism.

Commenting on the re-opening of Havengore Bridge, Ken Wickham, the Chairman of CHA Advisory Committee, said:

“Havengore Bridge is now open for normal operations. Lotus Eater from Paglesham was invited to take part in the reopening and be one of the first boats to passage through. We now look forward to many years of trouble free operation. This project was completed today after many years of persistent discussions and meetings with the help of our local MP Mark Francois with the MoD and QinetiQ. Please check for clearance on Channel 72 or ring 01702383436 when considering approaching this passage via Havengore and Potton Island bridges.”

“After literally years of making representations on this, the MoD and QinetiQ have found the necessary funding to revamp this 40-ton bridge. I am grateful to both of them and I hope my constituents can now enjoy freedom of navigation through this body of water. I would like to congratulate Ken Wickham and all his colleagues for their patience and dogged persistence in making this happen.”