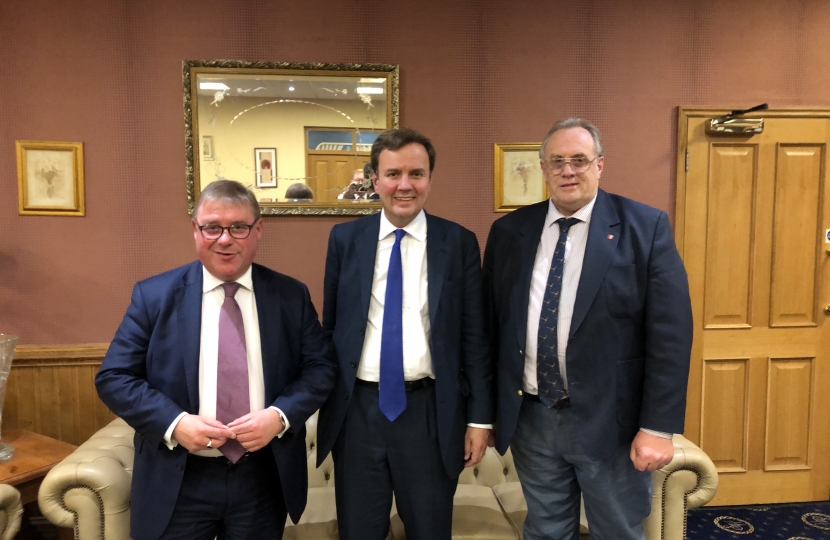 Rayleigh and Wickford MP, Mark Francois, was delighted to welcome his very experienced colleague, Greg Hands, the Member of Parliament for Chelsea and Fulham, when he addressed the Rayleigh and Wickford Conservative Supper Club recently, at Saxon Hall, on the subject of Brexit and future trade opportunities with the European Union.

Greg is a trade expert, having formerly served as a Minister of State at the Department for International Trade (DIT), in which capacity he was engaged in a number of trade discussions with countries all over the world. In his address to local Tories, Greg explained how so called ‘alternative arrangements’ could operate on the Northern Ireland/Republic of Ireland border, in the event of a Brexit deal being successfully agreed. Greg was clear that his preference was for the United Kingdom to leave the European Union with a negotiated deal, if at all possible.

As part of his talk, Greg also offered a number of reflections on his time as a Member of Parliament, including when both he and Mark served as colleagues in the Government Whips office, during the Conservative – Lib Dem coalition several years ago.

“Greg is an acknowledged trade expert, both at Westminster and internationally and at this very important time for this country, we were very fortunate that he took the time out to travel from Central London to explain to us in detail, how a future trading arrangements could work between the UK and the EU, particularly if we are able to agree a deal. Greg helped to chair the ‘Alternative Arrangements’ Commission, whose work has been fed into the Governments negotiating team, so if we are to finally achieve a deal,  it will be in no small part due to the input of Greg and his highly experienced team of trade lawyers and practitioners. We were very lucky to have Greg come out to Essex, to give us an insight into all this, I would like to express my sincere gratitude for him doing so. He went down really well with the audience.”