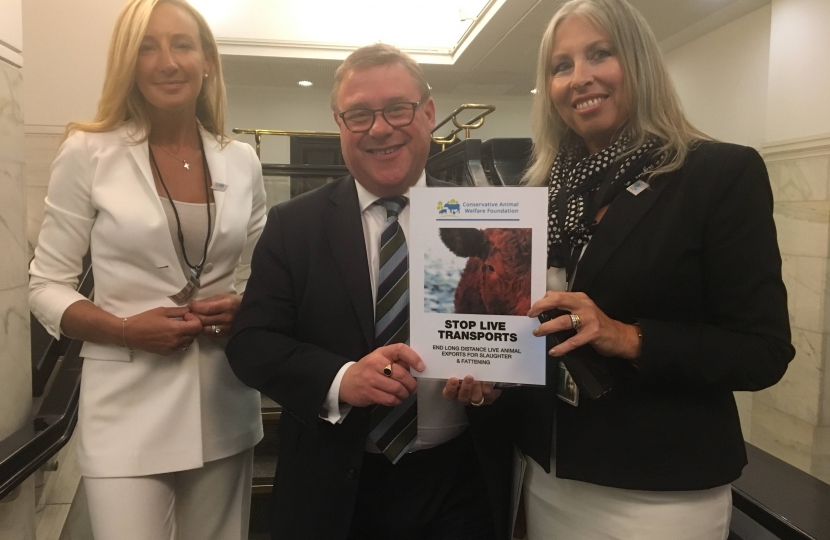 Rayleigh and Wickford MP, Mark Francois, has called for the UK to ban live animal exports after we leave the European Union on 31st October 2019. The avid Brexiteer believes that one of the advantages of leaving the EU will be that we can set our own animal welfare standards and end the cruel practice of live animal exports, which is currently protected under EU law.

Mark discussed the issue recently with Lorraine Platt, the Chairwoman of the Conservative Animal Welfare Foundation (CAWF), who briefed Mark on their campaign to change the law to ban live animal exports, as on of the advantages of leaving the European Union. This new found freedom would allow the UK to create its own animal welfare legislation – with an ability to raise standards above and beyond those which currently operate among the 27 countries of the EU.

In particular, current EU regulation permits the live export of animals, often across long distances, sometimes in very cramped conditions and all weathers including searing heat. Mark believes that this practice is unnecessarily cruel and should be brought to an end as soon as possible.

Commenting on his meetings with CAWF and his adding his support to their ban live exports campaign, Mark Francois MP said:

“There are clear animal welfare advantages in leaving the European Union, not least that we will regain control of our laws and thus be able to ban this outdated practice once and for all. EU regulations mean we still need to adhere to the practice of exporting live animals for slaughter which I think can no longer be justified in the 21st Century. There are many advantages to leaving the European Union, but this is one very specific one which I hope will appeal to animal lovers across the country – irrespective of whether they voted Leave or Remain, I shall certainly do all I can to support this campaign once we have left the EU at Halloween.”